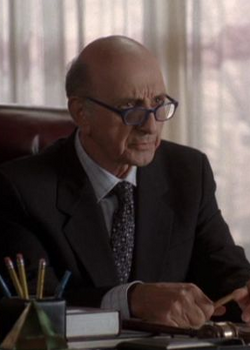 The Judge is an unnamed man who ruled on the division of assets and alimony during Gabrielle and Carlos Solis's divorce.

In a divorce office, Gabrielle and Carlos are both sat with their lawyers in front of a judge. The judge asks whether either of the parties have anything to add before he rules on the division of assets and alimony. Gabrielle’s lawyer just hopes his decision will reflect the pain and suffering caused to his client. Carlos’s lawyer then asks if the definition of suffering encompasses the seduction of Carlos four days earlier. The judge, Gabby and Gabby’s lawyer are all shocked. Carlos’s lawyer points out that Gabby knew Carlos was coming into some money so she hoped to stall the divorce in order for her to get it. Gabrielle insists it’s a vicious lie. However, Carlos plays a recording of him and Gabrielle having sex. Gabrielle is shocked that Carlos recorded such a thing, but Carlos doesn’t care. The judge asks Gabrielle if she’d like to respond, which she does, however her response leads to her being restrained and taken out the room as she yells at Carlos. Carlos then reveals that she will get to keep the house; just not anything in it, Gabrielle continues to yell at him as she’s taken away. ("Bang")

Retrieved from "https://desperatehousewives.fandom.com/wiki/Judge_(3.07)?oldid=77327"
Community content is available under CC-BY-SA unless otherwise noted.