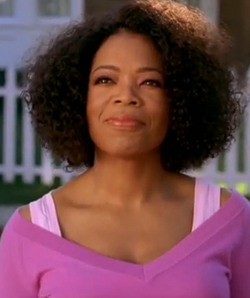 Karen Stouffer is a woman, played by Oprah Winfrey, in a bonus feature on the Season 1 DVD.

After deciding her life as a high-power business woman was too stressful, she and her husband retire to Wisteria Lane. However, they leave the street quickly when Karen sees all problems that Wisteria Lane plays host to.

Karen decides to bake an Applebrown Betty, but to do so, she needs a cup of sugar. She plans to go to the market for the sugar, but her husband tells her to borrow a cup from one of the neighnors as people in the suburbs live for that sort of thing. She goes from neighbor to neighbor holding her measuring cup. When Karen first arrives at Mike's house, he is in the shower, and thinking it is Susan, tells Karen to help herself. As Karen searches through Mike's cupboard, she then discovers the pile of money and the gun. As Mike finishes his shower, Karen flees the house. Next, Karen tries Lynette, but Lynette is struggling and fussing at her children; Karen decides that Lynette is just too busy. After leaving Lynette's, Karen tries Bree, but Bree and a crippled George are having an argument. George falls down some steps and screams at Bree when she tries to help him up.

Upon leaving Bree's, Karen finds Susan naked in her bushes and awkwardly leaves. Afterwards she goes up to Gaby's house and sees her kissing John Rowland. Karen is shocked and runs back to her husband saying that this is a bad neighborhood. He suggests she goes for a jog to calm down. Whilst out for the jog, she runs through the woods and sees Paul burrying the body of Martha Huber. The next shot is Karen frantically shoving suitcases into the moving van informing her husband to leave most of their belongings behind so they can make a speedy getaway. Just before the couple proceeds to drive away, Karen's husband discovers the infamous: "I KNOW WHAT YOU DID, IT MAKES ME SICK, I'M GOING TO TELL" note. Karen whispers in a worrisome tone, "Someone knows what we burried under the jacuzzi!" Karen and Gordon then speed away never to return to the lane.

Retrieved from "https://desperatehousewives.fandom.com/wiki/Karen_Stouffer?oldid=87954"
Community content is available under CC-BY-SA unless otherwise noted.