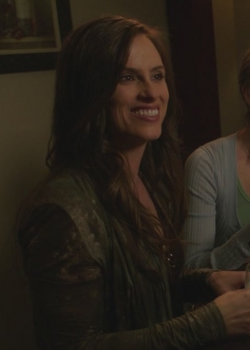 Kelly was a woman at a bar that Bree befriended for the night due to her similar appearance to Susan.

Whilst attending high school, Kelly made friends with two girls, Deirdre and Jill. The three girls became very close and stayed friends for years afterwards and occasionally went out together for a few drinks.

Kelly was on a girls night out with her two best friends, Deirdre and Jill. They were at a bar when a drunken Bree approached them. She told them they appeared to be having fun, so the three girls tapped their glasses together when one of them announced it was a girls night out. When Bree tried to join in, Deirdre became confused and asked who she was. After she introduced herself, Bree asked how the women knew each other. Kelly introduces herself and the women to Bree. Deirdre explained that she'd been friends with Kelly and Jill since high school and that she met Bree from randomly sitting at their table.

A long while later, Bree became even more drunk and she started to tell the girls everything that went bad in her life, so they started to get frustrated and slightly worried for themselves. When the girls tried to leave, Bree said four single women need to celebrate, but Deirdre reminded her that she, Kelly and Jane are all married. Bree told "Lynette" not to rub it in, which made Deirdre ask her to stop calling her "Lynette", implying she'd been doing it all night. The three women then quickly run out the bar to escape Bree. ("Putting it Together")

Retrieved from "https://desperatehousewives.fandom.com/wiki/Kelly_(8.09)?oldid=74140"
Community content is available under CC-BY-SA unless otherwise noted.