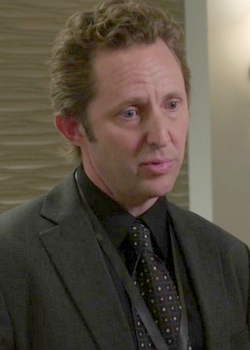 When Gabrielle and Renee rush into the Cumberly's' bridal department, Gabrielle notices a male employee entering the department - looking rather gloomy, one might add - and approaches him, all peppy, telling him she's Gabrielle Solis, head of VIP sales at the store, and he informs her that he's Kent, a minimum-wage worker stuck there on a Saturday. He asks her, rather lifeless, if he can help her with something; Gaby says she needs to borrow a bridal gown, for the afternoon. He says they don't lend bridal dresses, and Gaby, trying to charm him, walks with him and says she knows it's not policy, but asks if he can't do a favor for a fellow worker. He turns to her and claims to have never heard of her; he then asks her if she has her employeed ID card, to which Gaby responds that she doesn't because she's not one of those 'nerds' who carries an ID card on... she interrupts herself when she notices he himself is carrying an ID card, and she reaches for it and calls the lanyard 'handsome'. He snaps the card off of her hands and asks, to make clear, if she wants to take a $6'000 dress. She says it's $5'000 with her employee discount, and chuckles. He tells her to go away and walks off himself. Gaby is disappointed.

Later, Gabrielle is growing concerned by the minute as she notices the aforementioned mother and daughter apparently complaining to Kent about how Renee stole the dress they were admiring. The latter comes out of the dressing room, all set in the wedding gown she stole, and asks Gaby if they're all set. Gaby confirms this, reminding her that she's a big shot at the store, but there is, however, one tiny hiccup. They hear Kent loudly asking them where they're going with that dress, and Gaby says to her friend, "And now we run.", and pushes her by the arm and they storm off, with a shocked Kent looking on.

Retrieved from "https://desperatehousewives.fandom.com/wiki/Kent_(8.23)?oldid=68843"
Community content is available under CC-BY-SA unless otherwise noted.