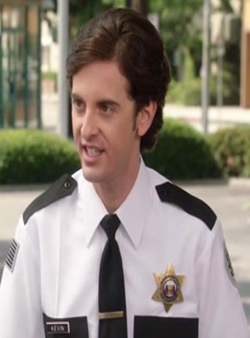 Kevin is the name of the young security officer who arrested Susan Delfino in the episode "Making the Connection".

Susan is seen crossing the road from a supermarket she just went, bringing with her a shopping cart filled with her groceries. She spots a policeman in a nearby car, and, considering her implication in a recent murder cover-up, Susan starts to quickly dash away. "Hey! Hold it right there!", a voice yells out, as the supermarket security officer - Kevin - comes at her. Susan stops and lets the guard catch up with her. "I know what you did...", he tells her. She nervously asks what he means, and he tells her that she walked out without paying for a box of soda. Susan apologizes, before an older security officer, Carl, jogs up behind the pair. The older officer asks for Susan's forgiveness - he has known Susan for years and understands that she would never commit a crime, she just accidentally forgot to pay for the soda. Susan tells the officers that she is indeed a bad person and that she has done a terrible thing and that she deserves to be punished. The younger officer pulls out a pair of handcuffs, but the older officer refuses to let Susan be arrested. Other shoppers begin to group around the scene to watch what is happening. Eventually, Susan ends up arresting herself by locking her hands in the cuffs. The young officer excitingly escorts her back inside the store, and Susan is strangely happy to be punished. ("Making the Connection")

Retrieved from "https://desperatehousewives.fandom.com/wiki/Kevin_(8.02)?oldid=77328"
Community content is available under CC-BY-SA unless otherwise noted.