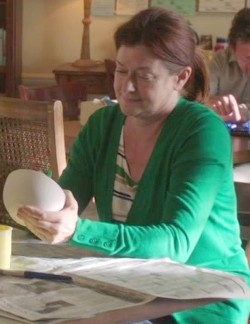 Laura Delfino is Mike Delfino's autistic sister, who was given away by her mother to be cared for by others, out of sheer convenience.

Laura Delfino was born in Texas, USA to Adele and Nick Delfino. She is an autistic person with such a severe form that she can't even speak.

Early on in her life, her mother decided to give her away to be cared for by others, as keeping an autistic child in a domestic environment so consumed by tension (Nick would often beat up Adele) would prove to be too big an inconvenience.

Therefore, Adele had to live with the decision of giving her daughter away for the rest of her life, something that ate away at her.

She kept this secret from her only son, Laura's younger brother, Mike, for a majority of his life. Adele wrote Mike a letter informing him of Laura.

Mike found Laura and set up a bank account in which he deposited money for her and sent checks to the care home every month.

Additionally, Mike visited his sister every Monday evening, telling his wife that he had softball practice. ("With So Little to Be Sure Of")

Following Mike's death, Lee McDermott helps Susan, his widow, sort out some of his clothes for charity, and he finds a locked black box. Lee opens it and decides that Susan shouldn't see what's inside, but she can't help being curious and alarmed.

Lee eventually shows her what it is: among several things, a checkbook, as apparently Mike set up an account eight years before when he and Susan were divorced. Lee tells her every month since then he's written a check to some woman named Jennie Hernandez.

Susan says she's never heard of her. She starts to grow concerned. Lee then takes out a piece of paper and says it's Jennie's address. It's somewhere in Mount Pleasant. Susan notices something else inside the box and takes it out. Drawings.

One of a field of flowers, and the other one of a butterfly. Susan is surprised, and Lee asks if there is any chance those drawings were made by MJ.

Susan denies this and when Lee tries to come up with some hypothetical explanation, Susan stops him, as they both know what this is... "There's a child out there. Mike's child."

Some time later, Susan is seen standing outside the door of the known address of Jennie Hernandez. She prepares to knock, but then hesitates. Her daughter Julie, who is standing beside her, tells her it's gonna be okay.

Susan builds up the courage to knock, and Jennie opens the door for them. Jennie asks who they are, and Susan introduces herself as Mike's wife. Jennie tells her she is so sorry for Susan's loss, and Susan thanks her for her sympathy.

Susan then tells her that what she needs from her, though, is an explanation, as to why Mike was sending her cheques every month. Jennie tells her the cheques were for Laura. Susan asks if Laura is Mike's daughter, and Jennie tells her... it's Mike's sister.


Shortly afterwards, Susan and Julie are inside the house, talking to Jennie, and looking over at Laura Delfino, Mike's sister, who has autism, and who is seen painting what appears to be a bowl.

Julie asks Jennie if this is a group home and Jennie explains it's a home for autistic adults.

Laura is one of their more severe cases as she can't speak, but she loves painting and spends hours every day at the table where she is sat.

Julie asks if Mike ever mentioned having a sister. Jennie tells them Mike was great with Laura and came by every Monday night to visit. Susan recalls that he would tell her he had softball.

A phone is heard ringing and Jennie asks to be excused and leaves. Susan says that this is crazy and Julie explains to her that this is good, because there is no other woman and no other child.

Susan can't help wondering why he hid this from her, asking herself if he thought she wasn't the kind of person that would accept Laura.

Julie doesn't know what to say and they are interrupted by a returning Jennie, who asks them if they would like to meet Laura.

After a brief reluctance, Julie tells her, with a smile, that they would love to. Jennie and Julie head in Laura's direction. A frustrated and confused Susan takes her time, but ultimately follows them.


Later, Julie is sitting at the dinner table in her house, reading a letter, when Susan, in her robe, comes down the stairs and comments that she's up early.

Julie tells her she's up late. She then explains to her mother that once in college she wrote a letter to Mike telling him how horrible Susan is.

The two women had just had a fight over the phone and she needed to put her anger somewhere.

When she was told Mike had kept some old letters in his box, Julie decided to check and see if hers was there too and instead she found some letters written to him by his mother, Adele.

It turns out Susan wasn't the only one kept in the dark about Mike's sister as he didn't even know she existed till eight years before.

Apparently, Mike's parents weren't up to the task of raising Laura. Julie hands her mother the letter and her mother reads an excerpt of it out loud.

Once Susan is done reading, Julie explains to her that Mike wasn't keeping a secret from his wife, he was doing it for his mother.

Susan then says she knows what Mike would've wanted her to do. She is gonna keep writing those checks and she is going to keep Laura in her life.

Susan gets up, surprised at the fact that her mother-in-law had to live with all of this on her conscience.

Julie starts getting emotional. Susan starts wondering how one does something like that, how one gives away their child just because it's inconvenient.

Julie starts sobbing and Susan realizes what has just happened. She takes her own words back, saying it's not like that with Julie, but her daughter acknowledges that it is.

This whole ordeal has made Julie realize she should keep her own child. ("With So Little to Be Sure Of")

Retrieved from "https://desperatehousewives.fandom.com/wiki/Laura_Delfino?oldid=86315"
Community content is available under CC-BY-SA unless otherwise noted.