Start a Wiki
watch 01:22
The Loop (TV)
Do you like this video?
Liaisons 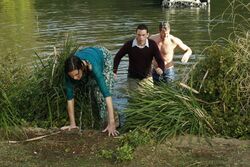 The episode opens with Mary Alice describing the lonely ones of Wisteria Lane; Ida Greenberg talking to her plants, Kayla whispering secrets to her dog, a neighbor shouting at the TV, and Mrs. McCluskey talking to her husband, as if he were still alive, there with her.

Ian becomes paranoid that Mike's following them when he runs into him at the orange stand at the market. Mike suggests Ian should move to the city if he's sick of seeing Mike all the time, as Fairview is a small town, and Ian pitches in a suggestion to Susan of moving to London while driving home. Susan becomes distracted from driving and swerves to avoid hitting a deer. This causes the car to go off the road and flip over into the lake. Both Ian and Susan are fine, but when saying they have to swim to shore, Ian reveals he can't swim. Mike's truck pulls up and he pulls them out, saving both of their lives, leaving Ian feeling emasculated.

That night, Susan agrees to move to London with Ian but when Ian spots a thank you gift to Mike from Susan, he becomes paranoid again. She realizes he only wants to move to keep her away from Mike and storms out, taking the thank you gift with her to Mikes. Mike realizes something isn't right and asks if she's okay. When she goes to explain, he kisses her (and it seems as if she likes being kissed by him), and Susan runs back to her house. Ian is waiting for her and apologises for his paranoid behaviour, saying it won't happen again. Meanwhile, Lynette feels under pressure, as with Tom's back injury, she's forced to manage the Pizzeria on her own.

Mrs McCluskey baby-sits Tom and the kids while she's out at work desperately trying to find a good assistant manager for the restaurant. All applicants seem useless until Rick, who previously worked at a 4-star restaurant, comes along. Lynette tells Tom of his expertise in food but when Tom learns Rick is an ex-cocaine addict, he tells her to keep looking. Tom becomes a burden for Mrs McCluskey and she takes the kids to the pizzeria, telling Lynette she quits. When dealing with the kids being at the Pizzeria and a rude complaining customer, Lynette says she can't do it and breaks down in tears. Luckily, Rick is there to help and she gives him the job of assistant manager. Tom phones Mrs McCluskey and apologises for his behavior, and she accepts, and when Mary Alice closes the episode with the theme of passion, we see the body of Mrs McCluskey's husband lying at the bottom of her freezer in the basement.

Bree is on her honeymoon with Orson.

Carlos and Edie awaken after having sex, both feeling awkward at how bad the sex was between them. Edie makes an excuse and tries to leave as early as she can. Later that day, Travers asks Edie if she was bad in bed, because he heard Carlos telling someone that on the phone. Edie confronts him and they reveal how bad they thought one another was, and they have sex for a second time. Things go worse and both Edie and Carlos have to go to the hospital when they sustain injuries. They agree to stay friends.

Travers, Edie and Carlos spend the day together at the Zoo and when looking at pictures, they comment on how they look like a good family. They share an emotional moment together and Carlos kisses Edie, and they finally have good sex with each other, and their relationship hits a new level. Gabrielle and Victor have another date together, and Gabrielle refuses to have sex with him when Victor brings it up. However, when Victor is speaking at his political rally of supporters, Gaby notices how the other women look at him and she is suddenly turned on. They then have sex in the back of his limousine. Gaby becomes obsessed and offended when Victor doesn't call within 24 hours. She turns to her friends for help and Edie suggests making him jealous. She takes a man to Victor's rally and kisses him in front of him, making him jealous and distracted from the rally. He then calls Gaby a number of times but refuses to answer, and when he visits her house, he confesses he's in love with her.

Mary Alice says that passion is the emotion of all. It can drive someone in arms of unexpected Lovers (Edie anh Carlos are having sex), it can knock down walls which someone build to protect his (her) heard (Victor and Gabrielle are having sex), it can surface, no matter how hard we tried to kepp it buried (Susan and Ian are having sex, but in secret Susan thinks about her and Mike's kiss and if she has feeling for him). At last it is shown that Karen mcluskey keeps her deceased husband in her freezer.

Retrieved from "https://desperatehousewives.fandom.com/wiki/Liaisons?oldid=87150"
Community content is available under CC-BY-SA unless otherwise noted.