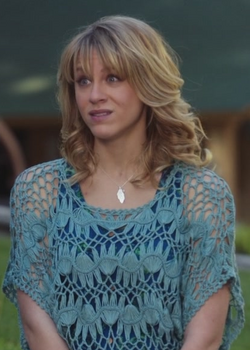 Lindsay was a private investigator hired by Trip to investigate in Bree Van de Kamp's case.

At the courthouse, Bree is sat, waiting for Trip. The blonde woman Trip was with walks past, and Bree recognizes her. She says hello, so the woman looks at Bree, confused. She asks the woman if she's looking for Trip, which she is. Bree explains he is meeting with the judge, so the woman decides to wait for him and she sits beside Bree on a bench. As they wait in silence, Bree glances at the woman and notices her cleavage almost falling out her blouse. She awkwardly asks the woman how she knows Trip, so she mysteriously says he "hires her". Bree immediately assumes she's a prostitute and asks the nature of her work. The woman tells her she cannot say, because discretion is important for her job. This only strengthens Bree's theories. Bree tells the woman "part of her discretion" is falling out of her blouse, shocking the woman. Bree tells the woman the court is Trip's workplace, so they should meet in her workplace, i.e. a street corner or motel. The woman gets angry and asks if she is being called a hooker; Bree confirms. They lady tells Bree to tell Trip she's off his case before walking away furiously. With that, Trip comes out of the court room and calls for "Lindsay", the woman who is walking away. She ignores him, so he tries to run after her, because she is his private investigator. However, Bree stops him and explains she will get Lindsay, as women can "misinterpret things".

At a street in Fairview, Lindsay is crouched on the pavement behind a car with her camera at the ready. Bree walks down the street and calls out for her. She approaches her and says they got off on the wrong foot earlier, but Lindsay angrily tells her to keep walking. Bree stays still and says she deserves that, but Lindsay grabs Bree to the ground, explaining she's on surveillance. However, the person she was spying on closes his curtains after noticing Lindsay. She yells at Bree for ruining her job, so Bree simply apologizes. She then apologizes for being rude to Lindsay earlier and insists she was "off color". She explains that she shouldn't have called her a hooker, but Lindsay simply states that Bree likes Trip and she got jealous because she though they were together. Bree insists she isn't jealous of her and trip, but then nervously asks if she is with Trip. Lindsay scoffs the idea, explaining he is "like one-hundred". Lindsay explains she'll go back on Trip's case as it isn't all Bree's fault. Bree asks what she means, so she explains that he's a lawyer, so women get the wrong idea because he protects them and listens to them. As Lindsay walks away, Bree tells her she thinks there is "something" between her and Trip. Lindsay apologizes and tells Bree she knows Trip, and he's into his cases, not his clients. As Lindsay finally leaves, Bree stands there with a disappointed look on her face.

Lindsay later returns during Bree's trial. She enters the court room and gives Trip a file. He reads the file, which contains information about Ramon Sanchez being Gabrielle Solis' step-father, Alejandro. ("The People Will Hear")

Retrieved from "https://desperatehousewives.fandom.com/wiki/Lindsay_(8.21)?oldid=77693"
Community content is available under CC-BY-SA unless otherwise noted.