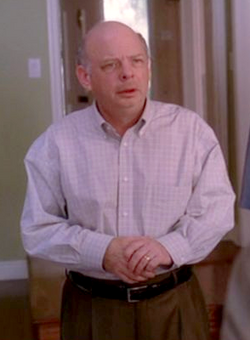 Lonny Moon was Susan's book agent whom she considered to be family. He eventually came involved in embezzlement and soon became bankrupt.

Lonny was Susan's book agent whom she considered family because he was always there for her: He helped her promote her first children's book, he took Susan to the hospital the night Julie was born, and he took her on a fun vacation when she divorced Karl.

One day, a car drives down Wisteria Lane, it passes an elderly lady being helped down the stairs of her house by a nurse, then two teenage girls gossiping, and then a young boy playing with his pet dog. The car pulls up outside Susan’s house and Lonny Moon, dressed in a suit, gets out. He walks towards her house, inside Susan’s house, Susan sees Lonny walking to her door through her window. She quickly greats him and asks what he’s doing here, Lonny jokingly says that it’s past noon so it’s socially acceptable to drink.

A while later, at a table in a bar, Susan and Lonny are both having a drink together. Susan says she can’t believe Lonny talked her into coming to the pub as she’s behind in her work, but she’s glad she came. Lonny says that he had an ulterior motif; that he decided to start his own agency. Susan is shocked by the news. Lonny then asks Susan if she’d come with him. Susan happily says she will. They then tap their drinks together and make a toast to the future. Susan says that she’d need to call her agency to tell them she’s going with Lonny, but Lonny says that isn’t necessary. Susan says that it may be rude to not tell them. Susan then notices Lonny is extremely nervous and uncomfortable, so she asks him what’s wrong. Lonny says that there’s been some “bad blood” between him and the partners. Susan asks why and Lonny explains that he got into a “thing” were he had to move some client money about to cover expenses. Susan tries to make sense of the situation and Lonny explains it in simple terms and says that it’s no big deal. Susan says that it sounds like embezzlement. Lonny doesn’t react kindly to this and he yells, asking why everyone keeps calling it that. Susan asks who else is calling it embezzlement and Lonny explains the partner’s forensic accountants. Susan becomes horrified and asks if he moved some of her money, but Lonny insists that he didn’t. Lonny says he knows what he did was wrong and he begs Susan not to hate him, but Susan says she could never hate him as he is “her Lonny”. Lonny asks Susan again to still come with him. Susan is reluctant at first, but she eventually accepts his offer. Lonny hugs Susan and thanks her.

The next morning, Susan is walking up to a large, expensive house. She reaches the front door, but notices the door handle is missing, so she pushes the door open. She enters the house and shouts out for Lonny, who comes running from his kitchen. He asks Susan what she’s doing here and she tells him that she was bringing the contracts, but his door was wide open. Lonny is happy to hear she signed the contract. Susan then looks around the house and sees it’s filled with clutter and there’s hardly any furniture. Lonny apologizes for the mess and he says he’s been working at home until the new offices are painted. Susan then looks around his house further and sees the kitchen is full of groceries. She asks where Genie is, and Lonny explains that she’s in Minnesota with the children visiting her mom. Susan then tries to turn on the lights, but they don’t work. She tells Lonny that there’s no electricity, but he puts it down to him being too swamped to pay the bills. Susan becomes concerned and then asks how much financial trouble Lonny is really in. Lonny sadly replies that he’s fine, but Susan doesn’t believe him. Lonny says it’s because he had to pay back all his clients at the same time, and restitution plus interest. He says he doesn’t recommend it as it “sucks you dry”. He then tries to reach for Susan’s contract, which is in her hand, but she pulls it away from him. Susan then asks Lonny if he stole her money and she says she wants the truth. Lonny insists that he didn’t, but Susan begs him not to lie. Lonny asks if that’s what she wants to hear in order for them to move on; she says she does, so Lonny confesses to stealing her money. Susan then awkwardly nods her head, showing she understands. Lonny says that he paid her back first, so the slate is wiped clean, but Susan’s nod then turns into a shake. She apologizes to him and says she can’t trust him. Lonny says she can, but Susan says she can’t. Lonny then demands the contract, but Susan yells “No!”. Lonny then snatches the contract off Susan and tries to run away with it, but Susan grabs his shoulders. She tries to pull him back, but he’s holding onto a wall. She asks if he’s trying to take her down with him, but Lonny says he isn’t going down. With that, they both fall onto the floor and they struggle for the contract. Lonny yells at Susan, calling her an “Amazon”, but she finally gets them back. They both then sigh with tiredness.

Back at Lonny’s house, Susan and Lonny have both calmed down and they’re sat on the floor together. Lonny explains that his bankruptcy started with bad real estate investments. Susan tells him that he should’ve just come clean. Lonny tells Susan that when you tell one lie, the second one comes easy and then you’re making up new lies to cover up the old ones and then you can’t turn back. Susan says she understands him. Lonny then tells Susan that when his wife, Genie, caught on she took the kids, the furniture, the bank and locked him out his own house. Lonny then says he cannot lose Susan as a client. Susan apologizes and says that he has, but he hasn’t lost her friendship. Lonny asks “Really?” and Susan assures him they’re still friends because he is “her Lonny”. Lonny then says that she is “his Susie”. Susan giggles and nods. Lonny then says that she’s “his Susie” again as he stares deeply into her eyes. Lonny then slowly progresses his lips towards hers and he pecks her on her lips. Susan flaps her arms about and asks what’s wrong with him. Lonny says that she said he’s “her Lonny”, but Susan says she didn’t mean it like that. Lonny then tells her that there’s always been a magnetism between them both, but Susan insists there hasn’t and there never will be. With that, she jumps up, grabs her purse and runs out of the house. Lonny then yells her was only coming clean.

Retrieved from "https://desperatehousewives.fandom.com/wiki/Lonny_Moon?oldid=88905"
Community content is available under CC-BY-SA unless otherwise noted.