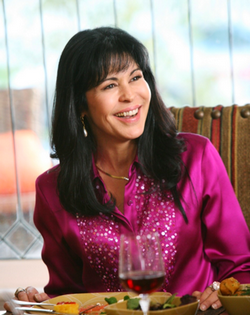 Lucia married Mr. Marquez, a factory worker. They lived in Las Colinas, Texas, and they had three children: Gabrielle, another daughter, and a son. Mr Marquez became ill with cancer and died when Gabrielle was five years old. Later, Lucia married Alejandro. Alejandro would get drunk on tequila and rape fifteen-year-old Gabrielle, who then was a virgin, and couldn't tell her mother about the abuse because she didn't think Lucia would believe her. At some point, Gabrielle ran away to New York and began a modeling career.

At some point, Alejandro was said to have died. However, in season 7, Gabrielle discovered that he faked his death.

She has dated other men, mostly rich, including the boyfriend whose break-up with leads her to show up at the Solises on Wisteria Lane.

Lucia shows up very much to Gabrielle's surprise, her reason being that she was left by her boyfriend and needed a place to stay. When Gabrielle finds out she may not be able to conceive children due to the injuries she sustained by falling down the stairs, it is Lucia who offers to be their surrogate. Carlos accepts the idea while Gabrielle seems reluctant.

The next day Gabrielle drops Lucia off at a hotel telling her to leave her alone and then drives off abandoning her. Carlos tries to reconcile the estranged mother and daughter but when he talks to Lucia about Gabrielle having been molested by her step-father Alejandro, Lucia brushes off the gravity of the thing, saying that she knew Gabrielle willingly seduced Alejandro to make her jealous, and she had forgiven her. Carlos then realizes Gabrielle was right about Lucia, and leaves her at the hotel.

Gabrielle tells Bill Pearce in "No Fits, No Fights, No Feuds" that it is her mother's birthday as an excuse to stop by the florist.

Retrieved from "https://desperatehousewives.fandom.com/wiki/Lucia?oldid=88461"
Community content is available under CC-BY-SA unless otherwise noted.