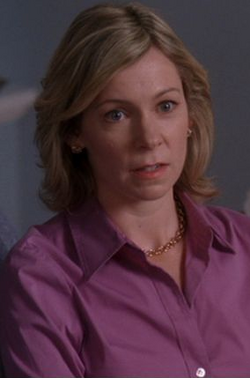 Lucy Lindquist is the younger sister of Lynette Scavo, as well as Stella Wingfield's middle child.

Lucy Lindquist (no married name known) is Stella Wingfield's middle child. She, along with her older sister Lynette and younger sister Lydia, was mistreated by her mother during their childhood, as Stella was constantly inebriated and abusive. As a result, Lucy grew to become a resentful woman towards her own mother, one who wasn't so eager to forgive her past misdeeds.

Lynette's first mention of a sister occurs in the episode "Anything You Can Do", when she shares with Jordana Geist that she wishes her sister visited her more often, after Jordana had told her she was expecting a visit from her sister and her sister's children. It is unclear whether Lynette's referring to Lucy or Lydia, but one can assume it's the former because at the time she was seemingly the only one with a domestic family life, which fit the theme of the conversation better. Lynette also mentions to her husband that she and her sisters were constantly beat up by their mother in "Children Will Listen", after her good friend Bree Van de Kamp beats up her child, which rubs Lynette the wrong way.

In the third season finale, Lynette talks to her sister over the phone, announcing to her that she has Hodgkins' lymphoma, and that she could use a loan to help pay for chemotherapy. However, she is told by Lucy that her husband Dave has recently lost his job, so they can't help out. Lynette then swears her sister to secrecy, hoping from prevent her from telling their mother, but it is to no avail, because the very next day Stella is already at the Scavos' front door.

Lucy's only physical appearance in the series (as portrayed by actress Carrie Preston) took place in the season four episode "You Can't Judge a Book by its Cover", in which Lynette tries to dump her mother on her sister Lydia, and so the latter calls Lucy to help her dump Stella back at the Scavos'. Lydia isn't willing to care for their mother, because she can never be happy when she's around, and Lucy isn't willing to do so either because she's still clinging on to hope that her husband Dave, from whom she's now separated, will get back together with her, something that is definitely not going to happen if her mother is living with her again. Lynette tells them she's got a full house and that they need to figure something out, as she is their mother and can't just be left anywhere to live out the rest of her days, but is told by her sisters that they don't feel like they owe Stella anything, because she was such a terrible mother when they were growing up. She even managed to ruin their Christmas celebrations. Lynette is appalled that her sisters don't care more for their mother. Lydia and Lucy state that they can help with money, but Lynette says she doesn't need their money, she can take care of their mother on her own. She then asks that they please don't visit her for a while because it's going to take her a long time to forgive them. Shortly afterwards, Stella, who had been listening to the entire conversation, leaves the Scavo home in a cab.

Retrieved from "https://desperatehousewives.fandom.com/wiki/Lucy?oldid=88258"
Community content is available under CC-BY-SA unless otherwise noted.