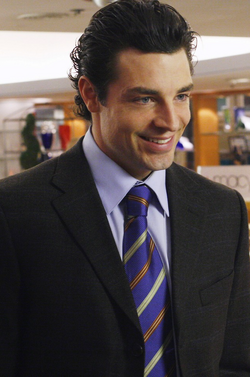 Luke Purdue was the lawyer of Zach Young who took affection to Gabrielle Solis.

Luke first bumped into Gabrielle in the mattress department of a local store when she and Zach Young were shopping there. The two got to talking and decided upon a date the same evening. The date goes great and teh two get along very well until someone delivers a "file" to Luke which contains a note from Zach Young telling him that if he doesn't break it off then he shall be fired. He very much tries to oblige to this but Gaby persists and he then receives a phone call from Zach telling him to say something that will stop the date. He then tells Gaby that he only dates girls who are in their twenties and that she is too old for him, Gabrielle is already sensitive about her age at this point as it's her thirty first birthday, she then, literally, kicks him out of the door, screaming at him, he then runs away and Zach swoops in.

Although Luke doesn't appear in this season, he and everyone else who worked for Zach are laid off after Zach declares bankruptcy from losing his fortune and Grandfather's Empire to drugs, gambling and women.

Retrieved from "https://desperatehousewives.fandom.com/wiki/Luke_Purdue?oldid=89228"
Community content is available under CC-BY-SA unless otherwise noted.