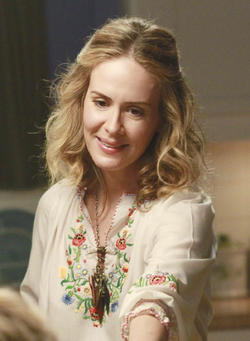 Lydia Lindquist is the younger sister of Lynette Scavo, as well as Stella Wingfield's youngest daughter.

Lydia Lindquist is Stella Wingfield's youngest child. She, along with her older sisters Lynette and Lucy, was mistreated by her mother during their childhood, as Stella was constantly inebriated and abusive. As a result, Lydia grew to become a resentful woman towards her own mother, one who wasn't so eager to forgive her past misdeeds.

Lynette's first mention of a sister occurs in the episode "Anything You Can Do", when she shares with Jordana Geist that she wishes her sister visited her more often, after Jordana had told her she was expecting a visit from her sister and her sister's children. It is unclear whether Lynette's referring to Lucy or Lydia, but one can assume it's the former because at the time she was seemingly the only one with a domestic family life, which fit the theme of the conversation better. In fact, Lydia is known for having a bad track record with men and starting up families. She would usually be dumped by men, who often turned out to con artists or adulterous, as evidenced by a conversation Lynette and her best friend Renee Perry, who knows Lydia, had in "Watch While I Revise the World". Lynette also mentions to her husband that she and her sisters were constantly beat up by their mother in "Children Will Listen", after her good friend Bree Van de Kamp beats up her child, which rubs Lynette the wrong way.

Lydia's first physical appearance in the series (as portrayed by actress Sarah Paulson) took place in the season four episode "You Can't Judge a Book by its Cover", in which Lynette tries to dump her mother on Lydia. After Stella had stayed with the Scavos for several months while Lynette underwent chemotherapy to cure her Hodgkins' lymphoma (Stella had battled cancer herself), she quickly became a burden for the Scavos, particularly due to her constant drinking, swearing and bringing random men into the house. Therefore, Lynette has the bright idea to invite Lydia for a lunch meeting at a casual diner. However, Lydia has an idea of what the motive could be, so she meets with her therapist beforehand who helps her make up some cue cards with expressions that should help her defend herself against Lynette's impositions. During said lunch meeting, Lydia makes it clear that she knows Lynette wants her to take back Stella. When the latter goes to check on some sport's results, Lydia confides in Lynette that she can't take their mother in with her anymore because she already had her once for over a year and she drained the life out of her. She's in a better place right now, and can't afford to have her mother drag her down anymore. An angered Lynette gives up, but only seemingly so. She purposely causes Lydia's cue cards to drop to the floor, and when her sister hunches down to grab them, Lynette takes her car's key. Stella comes back, and Lynette pretends to go get the waiter, but instead goes outside, takes her mother's luggage from her car's trunk, opens the trunk to Lydia's car with her key, and puts the luggage inside, then proceeding to leave. Meanwhile, Stella takes the opportunity to criticize Lydia's new hairdo, to which she promptly replies with another catch phrase from the cards, stating that her mother's words can't hurt her. Stella is annoyed.

Later, Lydia calls her sister Lucy to help her dump Stella back at the Scavos'. Lydia isn't willing to care for their mother, because she can never be happy when she's around, and Lucy isn't willing to do so either because she's still clinging on to hope that her husband Dave, from whom she's now separated, will get back together with her, something that is definitely not going to happen if her mother is living with her again. Lynette tells them she's got a full house and that they need to figure something out, as she is their mother and can't just be left anywhere to live out the rest of her days, but is told by her sisters that they don't feel like they owe Stella anything, because she was such a terrible mother when they were growing up. She even managed to ruin their Christmas celebrations. Lynette is appalled that her sisters don't care more for their mother. Lydia and Lucy state that they can help with money, but Lynette says she doesn't need their money, she can take care of their mother on her own. She then asks that they please don't visit her for a while because it's going to take her a long time to forgive them. Shortly afterwards, Stella, who had been listening to the entire conversation, leaves the Scavo home in a cab. ("You Can't Judge a Book by its Cover")

Lydia returns years later and Lynette assumes it's because she's recently been dumped again, which is almost always the motive for Lydia's visitations. She has therefore prepared herself for the eventual cry-fest by buying some booze and ice cream. However, when Lydia does finally arrive, Lynette finds her remarkably composed, in very natural looking clothing. They both hug, and Lynette, sounding shocked, says Lydia looks great. Lydia sees that Lynette thought she’d be her usual “blueberry mess of snot and tears”, but she says her life has changed because of her fiancé, Rashi. Lynette then looks over to the van parked on the street and she sees a man unloading some bags; he waves to her. Lydia then says she's sorry about her sister and her separation from Tom, and she says she’s there to comfort her... just as she too pulls out a bottle of wine and a large tub of ice cream.


Later, in Lynette’s kitchen, Lynette is sat at her table with a glass of wine while she reluctantly listens to Rashi tell the story of how he and Lydia met. As he tells the story, Lydia giggles sweetly with him. Lynette gives them both a look of disgust as she sees how quirky and in love they both are. Lydia then says since they met, three weeks later they got engaged, and then she shows Lynette the ring. Lynette says “Wow, that’s some rock”, and then it’s revealed that the ring's gem is literally a rock. Rashi says that he saw it on the beach after his class, and that it called out to him and he felt he may need it one day. Lydia then romantically says that he did, and then she tells Lynette that the universe is amazing. Lynette says it’s amazingly thrifty, so Lydia gives her an unimpressed, yet kind, scowl. Lynette questions why she isn’t getting a “buzz” from her third glass of wine, so Lydia explains that it's alcohol-free. Lydia then explains that she hasn’t had a drop to drink since Rashi did a liver-cleanse on her. Lynette congratulates Rashi’s “act”. He says it isn’t an act, just as he leaves to collect some spices from his van. The second he leaves the house, Lynette gets up and tells Lydia she can’t marry Rashi. Lydia says that she loves him and then she goes on to explain he’s leading a meditation seminar, and that Lynette should go because it could help with her marriage crashing. Lynette insists her marriage did not crash, and says that she and Tom are only separated. Lydia tries one last attempt at getting Lynette to go, but her sister still refuses.


That evening, at Lynette’s house, Lynette, Lydia and Rashi are all sat at the dining table eating a meal cooked by Lydia. Rashi says it’s the best she’s ever done and he asks what’s in it. Lydia then begins to list the ingredients, and finishes by saying there was one special ingredient. Lynette begs her not to say “love” because she’s already nauseous. Rashi then announces he’s going for a walk to help his digestive system, and then he leaves. When he leaves, Lydia sees Lynette eating ice cream and says it’s “poison”. Lynette agrees and reminds Lydia that she used to eat it all the time. Lydia acknowledges that, but then says she’s changed and she wants to help Lynette change.


Lynette says she’s lying and says she’s only here to rub her happy relationship in her face. Lydia tries to stop herself from yelling at Lynette and she reminds herself she’s in a bubble of loving energy. Lynette says that once Rashi leaves her, Lydia will be back to her normal, neurotic self. Lydia tells Lynette she is very mean that she hates her. Lynette then sees the true Lydia surfacing. Lydia tells Lynette all her life she treated her like a screw-up, but now she’s the screw-up and she yells joyfully over and over that she loves it. With that, Rashi says “wow”, revealing he heard the whole thing. The two look at him with shock, and then he leaves the house, speechless at Lydia’s behavior. Lydia then sadly runs after Rashi, leaving Lynette feeling guilty.


The following morning, Lydia is sat in Lynette’s kitchen sadly eating ice cream with a glass of wine nearby. Lynette enters the room and sees the state Lydia is in, so she asks if Rashi is gone, which she says he is. Lynette asks if he dumped her, but Lydia explains he needed to meditate on if he can still marry Lydia after seeing the “real her”. Lynette then comfortingly says that if was Rashi was so quick to leave, then he may not be the guy. However, Lydia says he is, but she’s just not the girl. She then explains that she thought she could put her “loser stuff” behind her, and actually have a stable relationship. Lynette then suggests Lydia go talk to Rashi, but Lydia explains she can’t, because Rashi told her that her energy is no longer welcome in the Yurt.

A little while later, Lynette meets with Rashi at his Yurt and convinces him to give Lydia one more chance, because she's still trying to figure out how to find her inner bliss. He agrees to do so.


Some time later, Lynette arrives home to find Lydia sat on the floor, smiling happily. She tells Lynette that Rashi called and that he decided he wanted to be with her, as he knows she’s changing and he’s willing to be patient. Lynette cheers joyfully and she agrees with Rashi that she is changing. She then explains that her changing is probably why she’s been so horrible to her... because she’s jealous. Lydia asks why, so Lynette explains that she “mounts” relationships and she makes them go the way she wants them too and that nobody can disagree with her. Lydia asks if that’s what happened with her and Tom, so Lynette says “Oh, yeah”. Lydia then tells Lynette that she can change too, but Lynette doesn’t think she can, however, Lydia assures Lynette she can, because she recognizes her problem. She then says a wise man once said “To begin the journey of change, we must tug on the boots of self-awareness”. Lynette asks if that man was Rashi, so Lydia smiles and says, with a smile, “isn’t he adorable?”. ("Watch While I Revise the World")

Retrieved from "https://desperatehousewives.fandom.com/wiki/Lydia_Lindquist?oldid=88255"
Community content is available under CC-BY-SA unless otherwise noted.