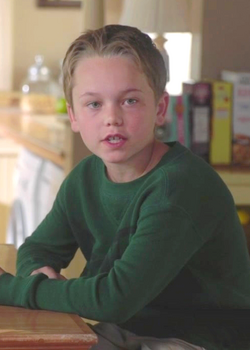 Maynard James "MJ" Delfino is the youngest child of Susan and Mike Delfino. Growing up, he was a shy vulnerable child but has since gotten a louder voice due to the death of his beloved father, Mike Delfino.

MJ was born on May 11, 2008. Originally Susan wanted to name him Conner, but later agreed to honor Mike's deceased grandfather, Maynard. Mike's other grandfather was mentioned as being named James, probably resulting in the "MJ" compromise.

He was bullied by Juanita Solis, which caused their mothers to have a fight, but this has since blown over and Juanita and MJ have become friends. When Mike began a relationship with Katherine, they take MJ out to the Zoo and bowling, but MJ initially resents Katherine's presence, throwing ice cream at her and dropping a bowling ball on her foot. This is short-lived, however, so much so that MJ begins to prefer the company of Katherine rather than Susan, much to Susan's distress. Mike and Susan work to get him into private school and are successful when Susan takes a job there as an art teacher's assistant. His life is in danger because Dave Williams plans to kill him in order to get revenge on Susan for killing his family. MJ does not die after Susan got through to Dave.

MJ is seen as the ring-bearer when Susan and Mike are remarried. He was also unwittingly dragged into Susan and Katherine's feud, when Katherine dared to badmouth Susan to her own son, which angered Mike.

MJ moves to a small apartment, with his parents, when the family goes into debt. He is also present when Susan collapses in Fairview Hospital, after losing a kidney in a neighborhood riot, and he alerts the attention of doctors.

When MJ's father makes a fatal mistake by crossing with a loan shark, the loan shark returns the favor by shooting Mike in the heart, killing him instantly.

After his father's death, MJ became to be violent and insolent with his mother and his sister, Julie. Susan let him do anything he wanted to, but Julie didn't agree with her. Susan had finally reacted when MJ threw a stapler on his teacher. After a little confrontation, MJ admits that he misses his father and he cries in his mother's arms.

Susan tries to help MJ making a car for a school competition, but MJ tells her that he only wants his dad back. As Susan desperately tries to find a solution for her child's problem, MJ pushes the car his mom made into the street, before a lorry smashes and destroys it. Later, Ben, Tom, Lee and Bob show up and tell MJ that he can count on them and call them anytime he wants to.

1 of 6
Add photo
Retrieved from "https://desperatehousewives.fandom.com/wiki/MJ_Delfino?oldid=89444"
Community content is available under CC-BY-SA unless otherwise noted.