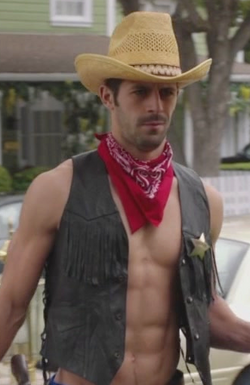 The male stripper seen in the episode "With So Little to Be Sure Of" is an exotic dancer hired by Gabrielle Solis to liven up Renee Perry's bridal shower.

When a bridal shower is hosted for Renee Perry by Bree Van de Kamp, at the latter's house, the guest of honor, Renee herself, is none too happy about the low-key, traditional party thrown for her, especially considering that all her gifts are kitchen appliances. Having predicted a tame party, Gabrielle Solis had hired a male stripper to come and liven things up. However, when she thinks he's arrived, it's actually a detective and two police officers who've come to arrest Bree. As they escort her out in handcuffs, the male stripper arrives to Bree's property, dressed for the job, and is surprised to find someone being taken under arrest. As she walks past him, Bree can't help but to stare reprehensively at the degrading stripper. ("With So Little to Be Sure Of")

Retrieved from "https://desperatehousewives.fandom.com/wiki/Male_Stripper_(8.19)?oldid=79344"
Community content is available under CC-BY-SA unless otherwise noted.