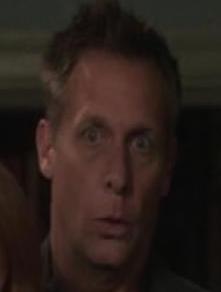 The man seen in the episode "Is This What You Call Love?" is an unnamed man who serves as one of promiscuous and alcoholic Bree Van de Kamp's many potential sexual partners.

Bree walks into her house, whilst making out with an unfamiliar man. The guy notices someone in the living room and asks Bree if this is really her house. Bree turns around, clearly drunk, and is surprised to find her three former best friends all there in the living room, waiting for her. Bree, rather clumsily, tries to take an angry stance as she says "What the hell?". Gabrielle tells the girls that there is no Bree left, given all the booze, loose morals and now even the swearing. Bree asks why they are in her house. Susan tells her this is an intervention. The man asks if this will be for TV, because he's married. He then tells Bree he was gonna tell her that eventually. Bree simply tells the girls that they've got to be kidding her. Lynette tells her they're her friends and they want to help. Bree then tells everyone to get out, and the man obliges, rushing out. Bree quietly says, "Not you. Idiot."

Retrieved from "https://desperatehousewives.fandom.com/wiki/Man_(8.13)?oldid=86313"
Community content is available under CC-BY-SA unless otherwise noted.