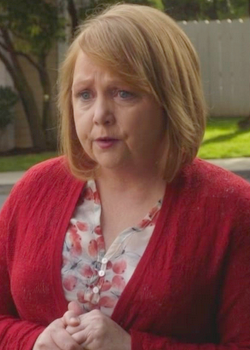 Marilyn is a secretary that works for Carlos Solis over at Global Group Venture.

Following the epitome of Carlos' drinking problem, Gabrielle arrives at his office, hoping to check up on things for him. There, she spots Marilyn, Carlos' secretary, frantically pushing buttons at a telephone, trying to get a hold of someone, with no luck. She's trying to contact Carlos. Gaby announces she's there to sign the pay-roll. Marilyn exclaims that she isn't bothered about the pay-roll. She's bothered that Frank Sweeney, one of the company's biggest clients, is on his way there, and he did not sound happy. In desperation, Marilyn picks up the phone and begins to dial again and adds "I'm going to try Carlos again!" Gaby takes the receiver from the secretary's hand and places it down. She lies and tells the worker that Carlos is home with the flu and that she can take care of everything. She undoes a few buttons on her blouse to show off more cleavage and says, "I know I'm taking women's lib back 20 years, but I can do this." ("Suspicion Song")

Some other day, Gabrielle and her daughter, Celia, are raking leaves off their property and placing them on the lawn next door - which belongs to neighborhood grouch, Mitzi Kinsky. Just then, Marilyn arrives and drops off some of Carlos' mail before asking Gaby if perhaps her boss could get out of rehab tomorrow - he has a business meal to attend. Gaby apologizes and informs Marilyn that letting Carlos out to go to a meal where he will be served wine is not a good idea. Marilyn tells Gaby that unless the deal is sealed, the company will loose out on a 90 million dollar account. Gabrielle agrees - she has an idea. ("Who Can Say What's True?")

Another time, Gabrielle is in her bathroom, making sure she's looking fabulous, when her cell phone rings and she picks up. It's Marilyn, who's whispering. Gaby asks why that is, and she explains that she doesn't want Mr. Solis to know she's calling her. Gaby asks what's wrong, and Marilyn, who finds herself in the midst of a line of blue-collared men, tells her that Carlos has been acting a little strange ever since he came back to work, and she really needs her to come down there. She then hangs up because Carlos is coming. Gabrielle is confused.


Later, Gabrielle enters the premises of Global Group Venture, makes her way through the line of men, and asks Marilyn what's going on. Marilyn sits quietly as the rambunctious man next to her reveals to Gabrielle that Carlos is giving away all their money. Gaby asks Marilyn who the man is, to which she replies that it's Patrick McDonald, their CFO. Patrick starts explaining to Gaby what all those simple men are doing there: a while back, they took over a steel company, chopped it up, sold it and made a nice profit, and these men are some of the workers who got laid off. Gaby asks what they are doing there, and is told that Carlos has taken it upon himself to make things right, by writing each of them a cheque for $50'000. Gabrielle quietly panicks, and rushes off to take a peek inside Carlos' office, followed by Marilyn and Patrick. He is inside, having a talk with a steel worker and his son. Patrick tells her that if he keeps this up, they'll be bankrupt in a couple of weeks. Marilyn then lowly tells Gabrielle that she is a party girl with a taste for young Brazilian gentlemen, so she really needs this job. Gaby says "I'm on it", and enters the office. Patrick can't help but stare at Marilyn because of what she just said. ("You Take for Granted")

Retrieved from "https://desperatehousewives.fandom.com/wiki/Marilyn?oldid=78226"
Community content is available under CC-BY-SA unless otherwise noted.