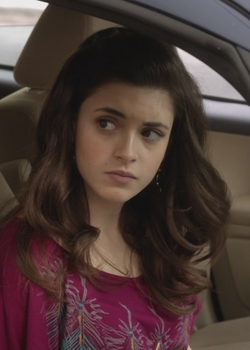 Marisa Sanchez was the stepdaughter of Ramón Sanchez, whom he molested.

Marisa grew up with her mother, Claudia Sanchez and step-father, Ramon Sanchez, in the state of Oklahoma.

She was molested by Ramon on numerous occasions, but she kept it a secret, hoping it would stop and thinking nobody would believe her.

Susan visits the Sanchez family to see how they are coping after the disappearance of Alejandro.

Marisa, Alejandro's step-daughter, appears in the kitchen doorway. Claudia glances at the cheque Susan gave her and tells Susan that she added an extra 0 too many.

Susan admits that she wants to help Claudia and Marisa out because of their "situation."

Claudia informs Susan that the situation is temporary; she knows her husband will come back. Susan, knowing the truth, convinces Claudia to keep the check.

As Claudia talks about Alejandro, Susan spots Marisa looking upset and hurt. Claudia thanks Susan, who starts to leave. She pauses when she walks past Marisa and hesitates before saying nothing and exiting.

Later on, Susan is waiting in her parked car outside Claudia and Marisa's home. It is nighttime. She spots Marisa pulling a garbage can to the sidewalk and eagerly hops out of the car to speak to the young girl. "It's Marisa, right?", Susan asks gently, "I'm Susan. I don't know if you remember me from the open house?"

Marisa attempts to fetch her mother from inside, but Susan admits she wants to talk to Marisa alone, just the two of them.

Susan reveals that she saw Marisa get upset when Claudia mentioned Alejandro's name and wonders if there was a 'problem' between the girl and her step-father. "I don't want to talk about this", Marisa says calmly, looking around.

Susan attempts to comfort Marisa and says that she knows of Alejandro and especially knows of the kind-of-person he is - "You can tell me", Susan whispers, "Did he ever hurt you?"

Marisa begins to tear up. "I came here because I know what he did. And although I can't take away the pain, I can promise you one thing", Susan says sternly, "Your stepfather will never hurt you again."

Marisa asks how Susan can know that and Susan tells her; "I just know... He is never coming back. I promise." She fights back tears as Susan heads back to her car.

Even later, Claudia is on the phone to her bank. She begs the bank not to cancel her card as she has recently come into some money now and can make the minimum payment.

Marisa sits at the dining table. "Marry a rich man, Marisa", Claudia tells her daughter after finishing her call, "Because the only thing guaranteed in life is that the bills will never stop."

Marisa suggests that her mother sell Alejandro's motorcycle but Claudia refuses as Alejandro loved it and would kill her if she did so.

Marisa hesitates before asking a question that angers her mother; "What if he never comes back?" Claudia exclaims, "Of course he's coming back! Why would you even say that?"

Marisa looks away from her mother's piercing eyes and doesn't answer. Claudia asks if Alejandro has contacted his step-daughter, Marisa denies this.

Claudia asks again how Marisa would know Alejandro won't return. "That woman that bought all that stuff," Marisa stammers, "She came to talk to me. It was weird but she promised he'd never come back."

Claudia's face is serious and threatening. She asks her daughter how Susan would know if Alejandro would return or not. Marisa shakes her head and replies, "That's what she said and she seemed pretty certain about it." Claudia walks into the kitchen and ponders to herself.

She reaches into her jean pocket and pulls out the cheque Susan had written - Susan's address is written on the top left hand-corner of it. Claudia looks up with a determined face. ("Who Can Say What's True?")

On Wisteria Lane, Susan approaches Marisa, who’s in the car studying. She says hi and asks if she’s okay, so Marisa replies that she just wants everything to be over. Susan says she does too.

Marisa then explains that her mother won’t stop looking for Ramon because she loves him. Susan asks if she told her mother about what happened, so Marisa replies “no way” and states that she would never believe her. Susan then asks if she’s told anyone, and she says she hasn’t.

Susan tells Marisa that she knows someone who went through the same thing as her and she said keeping the secret only made things worse. Marisa seems to understand this becomes silent with fear.

Meanwhile, Gaby tells Claudia when she was fifteen, Alejandro molested her. Claudia sort of laughs in disbelief and then asks if she expects her to believe that. Gaby states she was a virgin and he hurt her, but Claudia walks away and calls her a liar. Gaby chases her and says she knows it’s hard to hear.

Claudia explains she doesn’t know what happened to her husband, but she knows what she’s been told is a lie. Gaby insists it isn’t and calls him a child molester. Claudia yells at Gabrielle, telling her to shut up. She tells her she can say all the horrible things she wants, but she’ll never believe her.

With that, Marisa, who’s standing in the doorway, asks her to believe her. Claudia turns around to see her crying and then says she was too scared to tell her. Claudia suddenly realizes Gaby was telling the truth. Marisa explains she thought he would eventually stop, and they both begin to cry. Claudia then walks up Marisa and she hugs her to comfort her.

Later on, Gaby answers her door to see Claudia and Marisa. Gabrielle kindly invites them in, but Claudia politely declines, saying they came to say goodbye and Marisa adds “thank you."

Gaby asks if they’re sure they don’t want to stay, but Claudia jokingly says that Marisa has missed too much school. Claudia then asks for a moment alone with Gaby, so Marisa hugs Gabrielle before heading back to the car. ("What's the Good of Being Good?")

Retrieved from "https://desperatehousewives.fandom.com/wiki/Marisa_Sanchez?oldid=86945"
Community content is available under CC-BY-SA unless otherwise noted.