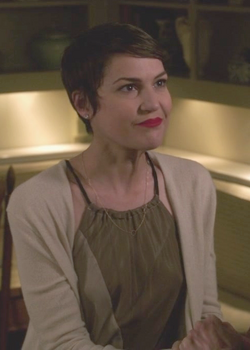 Mary Beth was Andrew's fiancée, whom she agreed to marry to help herself feel loved after a lifetime of rejection.

Mary Beth's parents created a custard brand which became a multi-billion dollar business. During her childhood, Mary Beth was overweight and this damaged her confidence. In later life, after loosing her weight, men still didn't seem attracted to her. She eventually met Andrew Van de Kamp and they both got engaged to benefit themselves. ("Any Moment")

Andrew tells his mother he has met someone. Bree tells him that’s wonderful because she knows how hard his separation from Alex was. Andrew tells Bree’s he’s only been seeing the person for a couple of months, but it’s serious. Bree asks how serious it is, so Andrew explains it’s serious enough he thought they should meet each other. Bree asks if his partner is here and then she eagerly walks to her living room. Andrew awkwardly tells her to keep an open mind. When Bree enters the living room, she sees a pretty woman stood next to a suitcase. Bree asks who she is, so Andrew introduces her, Mary Beth, as his fiancée. He puts his arm around her and they both smile at Bree, who just looks back with intense confusion.

At Bree’s house, Bree serves tea to Andrew and Mary Beth. Mary Beth tells Bree she’s glad to meet her as she kept telling Andrew she can’t marry him without meeting his mom. Still in shock and thinking Mary Beth doesn’t know about Andrew’s sexuality, Bree asks if they’re really engaged. Andrew confirms and tells his mother she should be happy he moved on. Bree explains she just has many questions to ask, so Mary Beth states Bree must be thinking it’s too soon. Hinting Andrew’s sexuality, she says that’s not what she’s thinking. Andrew awkwardly laughs, trying to make her stop. Bree apologizes and tells Mary Beth she’s just “different” to Andrew’s previous partners. Andrew kisses Mary Beth’s hand and explains that people change. Bree asks how they met, so Mary Beth when she was supposed to attend an over-eaters meeting, she “accidentally” walked into an AA meeting to get a donut; in there she ran into Andrew. Shocked, Bree asks if Mary Beth was overweight, so she explains that she lost over 200 lbs and giggles that she gained over 100 lbs of “grade a beefcake” (meaning Andrew). Andrew says she’s adorable, so Bree asks him to meet her in the kitchen to “get some tea biscuits that are on a high shelf”. As they walk away, Mary Beth smiles at the idea of tea biscuits, and then randomly states they have 46 calories.

Later on, Bree, Andrew and Mary Beth are sat at the dining table eating a meal. Mary Beth compliments the food and then asks if she can take a picture of the food, so she can get “full on the memory” later on. Bree states that she doesn’t know anything about Mary Beth so she asks what she works as. Mary Beth explains that she doesn’t work because her parents were “quite generous”. Bree asks what her parents work as, so Andrew awkwardly tries to make his mother stop prying. However, Mary Beth explains her parents created ‘’Mary Beth’s Frozen Custard’’. Bree is amazed, stating it must be a multi-billion dollar company. Suddenly, everything becomes clear to Bree and she angrily asks Andrew to meet her in the kitchen. Once in the kitchen, Bree explains she never thought Andrew would stoop so low to marry someone for their money. Andrew insists he loves Mary Beth, but Bree tells him Mary Beth is “disturbed” when they see her talking to her food and photographing it. She then reminds him that he’s gay, so Andrew questions why his mother cannot accept why he’s changed. Bree tells him being gay is not a choice and she’s okay with it. Annoyed with his mother, Andrew walks back into the dining room and tells Mary Beth they’re leaving.

Outside Bree’s house, Bree approaches Andrew and Mary Beth who are getting out of a car, and she thanks them for accepting her apology and visiting before they leave time. She tells them she hasn’t had the appropriate reaction to their wedding, but Mary Beth assures her she’s been wonderful. Bree leads the couple inside and explains she’s thrown a surprise engagement party to show her support. She opens the door and the music pours out. They enter the front room to find lots of gay men dancing together. When they see Andrew, they wave flirtatiously at him. Shocked, Andrew asks what she’s done, so she explains she just invited a few friends over. Two of the men approach Andrew and in the most flamboyant way possible, they greet him. One of them asks who Mary Beth is, so Bree explains she’s Andrew’s fiancée. The two men are stunned for a moment and then they introduce each other as Brian, with an “i” and Bryan, with a “y”. Bryan suddenly takes Andrew into the other room to get details on his wedding. Brian and a group of other men follow him. As he is led away, Andrew tells Mary Beth to get a drink from the kitchen.

A little while later, Mary Beth is in the kitchen pouring herself a glass of wine. Bree enters and asks what she thinks of Andrew’s friends. She tells her they seem sweet... and very well groomed. Bree tries to hint to Mary Beth that they’re gay, but Mary Beth suddenly tells Bree that she knows Andrew is gay. Bree is shocked, so Mary Beth explains that they’ve never had sex and he has a picture of Michael Phelps beside his bed. Bree expresses her confusion, so Mary Beth tells her that she grew up fat and lonely, and when she lost the weight, she thought men would see her as attractive, but they didn’t, so she gave up. She then explains when she met Andrew, she thought she could do a lot worse because he’s sweet and kind. Bree holds Mary Beth’s hands and tells her that she deserves romance and passion and she shouldn’t be with someone for companionship. She tells her the right man is out there, so she shouldn’t just settle because it isn’t fair to herself or Andrew. Mary Beth nods in agreement, and she exits the kitchen to find Andrew. She approaches him, and tells her that they need to talk. ("Any Moment")

Retrieved from "https://desperatehousewives.fandom.com/wiki/Mary_Beth?oldid=88067"
Community content is available under CC-BY-SA unless otherwise noted.