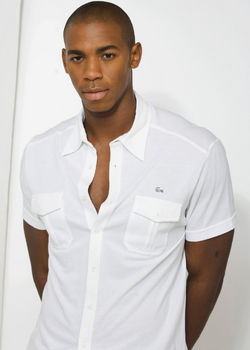 Matthew Applewhite was the son of Betty Applewhite. As he is the true killer of Melanie Foster which makes him responsible for Season 2's main storyline, he takes the role of main antagonist for Season 2.

Matthew is introduced as Betty Applewhite's son. Matthew and Betty locked Caleb in the basement as punishment for Melanie's death, but Betty is unaware that Matthew was the true killer.

Midway through season 2, Matthew starts dating Danielle Van de Kamp and neither of their mothers are happy with this arrangement.

Matthew begins to resent his own mother for interfering with his life, arguing that just because Caleb killed Melanie he should not have to live in confinement himself.

When Betty presents the idea of moving from Wisteria Lane, Matthew and Danielle create a plan to get Caleb out of the way. Matthew lies to Caleb telling him that Danielle likes him and she wants to kiss him.

Caleb goes to the Van de Kamp house and into Danielle's room but Danielle panics and screams for Bree. Bree enters with her gun and frightens Caleb away.

After this, Betty decides to kill Caleb peacefully with some pills disguised in ice cream, but while he is eating the ice cream, Caleb tells Betty that Matthew said he should go to Danielle's room.

She does not kill Caleb and instead locks Matthew in the basement. Danielle finds Matthew and when Betty brings Matthew some food Danielle attacks her and Matthew and Danielle run away.

After being questioned by the police, Betty learns that Matthew killed Melanie and tells Bree. Bree rushes home to find Danielle and Matthew there with money they stole from Bree's safe and she refuses to let Matthew and Danielle out of the house.

Matthew brings out a gun and tells Bree to move or he'll shoot her and she challenges him to in order to prove to her daughter that Matthew is a murderer.

Before he can pulls the trigger, Matthew is shot in the heart by a police sniper and dies instantly. Caleb and Betty leave Wisteria Lane after Matthew's death.

Half Year later Danielle mentioned his death to her new step-father Orson and Bree when two of them decided to look after Andrew.

Retrieved from "https://desperatehousewives.fandom.com/wiki/Matthew_Applewhite?oldid=90005"
Community content is available under CC-BY-SA unless otherwise noted.