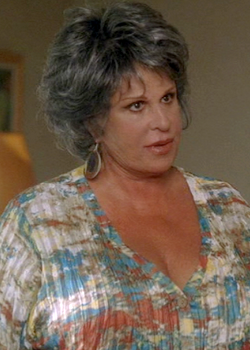 Maxine one day met a man named Sidney Rosen. Maxine and Sidney got married and had a daughter together. One day Sidney died and Maxine was left poor. Maxine picked herself up and started a lingerie business from the ground up. ("Remember Paul?")

Susan Delfino visits Maxine in the season seven premiere after just moving into the apartment and Susan explains her financial difficulties to Maxine who offers her a job as a lingerie model. Susan finds the idea revolting but Maxine tells her that there's no sex, just doing housework in lingerie. Maxine reveals that her own daughter is doing it so it's not that bad, and it's mainly just viewed in Europe. Susan storms out of Maxine's apartment completely grossed out but later returns when she see's how much debt she and Mike are in. ("Remember Paul?")

Susan is performing in her first show as a "model" but her viewers are dropping because she isn't putting on a big enough show. Maxine comes over to Susan's apartment to help her work on her skills and Susan eventually becomes number one. Maxine comes over the next day to pay Susan and tell her she's doing a great job. ("You Must Meet My Wife")

While Susan was performing in one of her shows, Maxine comes over to congraduate her for getting the most rating and more than Stacy Strauss. Susan later comes over to Maxine's apartment to report Stacy Strauss for threatening her. Maxine tells Susan that there's nothing to worry about. When Susan does one of her shows, she steels one of Stacy's moves and Stacy comes over and Susan and Stacy start a cat fight which is airing on the internet. Maxine see's this and comes over to tell them to make sure to stay in front of the camera only to find out that it wasn't an actual skit. Maxine tells Susan and Stacy that the fight got so many hits that it fried her router. ("Truly Content")

Maxine reveals that there are gonna be some business changes and Susan should quit because the show is going to the U.S. Susan tells Maxine that she can't quit because things are finally turning around for her and Mike. Maxine tells Susan that she'll try to drag out the changes but it won't last for long. Susan is driving around one day see's them putting up a billboard with Susan on it and she calls Maxine. Susan confronts Maxine about the billboard and she says the internet works fast. Maxine tells Susan that Susan will get paid $9,000 for the billboard ad. Susan then decides to do private videos. ("The Thing That Counts is What's Inside")

After Susan hangs up on a conversation, over at Maxine's place, Maxine is yelling at Susan, telling her that you never pull the plug in the middle of a session. Susan points out that the guy was a total perv who clearly had severe mother issues. She pulls her lingerie up. Maxine, angrily, tells Susan that she's just lost them an amjor client and should the guy begin talking about it at work, they could lose the hole city council. Susan sighs and sits down, apologizing, saying that she lost her nerve, "I can't keep giving you chances like this." Maxine tells Susan before going to answer a ringing phone. She talks, "Va-Va-Va-Broom... oh, you want a private session with Tanya, sorry, that isn't gonna happen, she doesn't work for me anymore." Maxine says as she looks at Susan. Susan seems shocked and ashamed. After a mishap, Susan ends up quitting. ("Let Me Entertain You")

Retrieved from "https://desperatehousewives.fandom.com/wiki/Maxine_Rosen?oldid=84405"
Community content is available under CC-BY-SA unless otherwise noted.