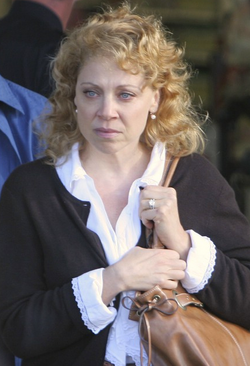 Maya is the woman who killed Carolyn Bigsby when she took a group of people hostage at a local supermarket.

When Carolyn Bigsby takes a group of people hostage in a supermarket, she looks around the store gathering people up. She eventually finds an elderly woman and a Maya hiding behind a shelf. She gets them to stand up and she herds them to the back of the store. She asks if she knows Maya, which she does because of her son, Carolyn realises who she is and then tells her not to do anything to make her son, Jordan, wake up without a mother in the morning. Once she’s gathered the hostages all together Carolyn apologizes for putting a “crimp” in their day and she asks them to help her keep the police out while she and Harvey have a “chat”. She then notices a security camera so she looks at it and calls for Harvey, knowing he can see her. She tells him he’s inconveniencing his customers so he should get out the office.

After Nora is shot, a fight breaks out between Carolyn and some of the hostages. As Austin and Carolyn fight for control of the gun, Maya steps in and shoots Carolyn in the head with the gun. As the hostages are released from the supermarket, Maya guiltily and quietly walks away. ("Bang")

1 of 1
Add photo
Retrieved from "https://desperatehousewives.fandom.com/wiki/Maya?oldid=75179"
Community content is available under CC-BY-SA unless otherwise noted.