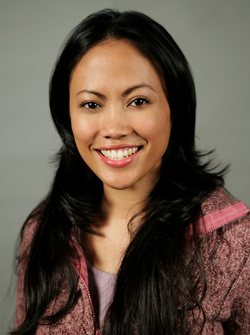 Melanie Foster was a High School girl who got involved with Matthew Applewhite and soon became his girlfriend, who attracted the attention of Caleb Applewhite.

She is seen in flashbacks in Remember, Part 1. When Matthew tried to end their relationship, Melanie reacted angrily and asked him to meet her at a lumberyard. When Caleb shows up first and tries to kiss Melanie, she reacts violently and pushes him away. But he persists and eventually hits her with the back of an axe and knocks her unconscious. Minutes later, Matthew arrives to find a groggy Melanie, but when she persistently bashes Caleb, Matthew beats her to death and covers her with his sweater. Because Caleb arrived home first with blood on his hands, Betty is convinced it is he that murdered Melanie. Melanie's family hired Curtis Monroe to look for Caleb; however, he accidentally shot himself to death while falling on the stairs in the Applewhite basement. Matthew then framed Caleb for the Death of Melanie.

Caleb fell in love with Melanie and was obsessed over her. He thought she was 'Beautiful'.

Her ex-boyfriend who ended up killing her with an axe because melanie was going to lie to the police by saying that Caleb raped her.

1 of 3
Add photo
Retrieved from "https://desperatehousewives.fandom.com/wiki/Melanie_Foster?oldid=88874"
Community content is available under CC-BY-SA unless otherwise noted.