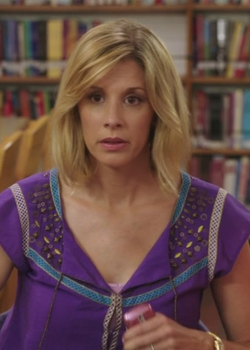 Melissa is one of the Parent-Teacher Association members at Oakridge Elementary School who becomes Gabrielle Solis' ally in her quest to take down former president Dana.

Gabrielle and Juanita are seen in the B lot, looking through the fence. Juanita asks her mother if that building she sees in the distance, far from the, is the school. Gaby is frustrated, and is met by two other mothers, Melissa and Rachel, as she walks out. They notice she's new to the B lot, and ask her what she's in for. Gaby explains to them what happened, and adds that she should be out of the B lot soon enough. The women laugh at her, and explain their situations: Melissa took a cell phone call in the green zone, and has been parking in the B lot for 2 months already, whereas Rachel's son had peanut butter crackers in his lunchbox, which means she's looking at a much bigger punishment. Gaby asks them why she even got the job if she is looked down upon by the parents, and is told that the parents actually voted for her, as it is an elected position. Gaby then tries to get them to come to the next PTA meeting, which will be held the following Thursday, and rally against Dana. After some initial hesitation, the women agree.

Gabrielle arrives at the PTA meeting on Thursday, late, and explains to Rachel and Melissa, next to whom she sits, in the back, that went to an AA meeting instead without knowing. When Dana asks her what brings her to her first PTA meeting ever, Gaby explains that they're there to rally against her, as it only takes five disgruntled parents to vote to take down the president, per the rule book Dana follows. Dana manages to blackmail Rachel and Melissa back into her side by handing them green zone placards, forcing Gabrielle to lose two of her followers and her plan to go down the crapper. Dana mocks her, telling her apparently they won't be taking that vote after all, and Gaby asks what else she can do now, considering she already parks in the B lot. Dana gives her a smirk and, the following morning, Gabrielle is seen getting out of her parked car in the C lot. A frustrated Juanita tells her "Nice, mom".

As Gabrielle enters the green zone one morning, Rachel and Melissa approach her from outside the vehicle, trying to dissuade her from doing what she's doing, as she can't be in the carpool lane without a placard. Gabrielle tells them she doesn't give a crap: it's time to teach a Dana a lesson - they need to break the back of their oppressor. ("School of Hard Knocks")

A PTA meeting is being held at the Oakridge Elementary School library. Cindy removes a towel off a plate of chocolate cookies and hands then around the group. The plate is passed along to Melissa, who is too busy talking on the phone to eat any of the cookies and passes them along. Rachel takes a cookie off the plate, hands it over to another parent, and starts to whisper gossip into her friend's ear.

Gabrielle is the newly appointed PTA president, and she is late for the meeting. Just then, Gaby elegantly walks through the library double doors, waves her purse in the air and exclaims "Hi guys! I know, I'm a little bit late." The rest of the PTA group a stern and serious. They've been waiting for 45 minutes. Gaby explains that she got held up because she went to a spa and had a seaweed body wrap. "So, what's on the agenda here?" Gabrielle says casually, sipping some coffee out of a cardboard cup. Rachel tells her that they need to plan teacher-appreciation night. Gabrielle understands and asks Cindy if she wants to bring the food. Cindy replies with a firm "No." Gabrielle asks around the group of positions the mothers could do, but everyone refuses to do a specific task. "What's going on here?" a confused Gaby asks. "What's going on, is you wasted our time," Cindy replies, "I'm leaving. I have to pick up my kids." Cindy packs up her paperwork into a folder and begins to leave. "I have to get back to my job" Melissa adds, as she folds up her laptop. "I need to take my mother to chemo" adds a cold Rachel. The rest of the group also begins packing up and leaving. Cindy explains how she and the rest of the PTA aren't like Gaby, they have lives, so she can do the teacher-appreciation night on her own. They leave and Gabrielle turns to the only remaining mother and adds "Jeez, talk about selfish!"

Later, Melissa, Cindy and Rachel (along with a few other PTA moms) all report to the library, where Gabrielle is waiting for them. She apologizes to them for blowing them off for a spa appointment when they have such busy lives. "Message received - loud and clear," Gabrielle exclaims, "To show you, that I've taken your complaint to heart, may I present, my beauty team!" The PTA gals are still not impressed. "Wow, good to know you got our message" Cindy snarls. Gabrielle walks off. Melissa and Rachel both join Cindy's side and ask if they really are helping her. "No, we're helping ourselves to a free spa day. Then we're going to leave her twisting in the wind."

The teacher-parent appreciation night is only a few hours away. The PTA parents have not done any of the work, despite telling Gaby they would. "What are you guys doing? Nothing has been set up!" a flustered Gaby exclaims. The parents all stare at her blankly. "Oh, well, I'm just so relaxed from that massage I'd hate to lift something and tense up again" Cindy chimes, while sipping a cup of coffee. Gaby is angry because she went out of her way to help them. Cindy is exasperated by how out-of-touch Gabrielle clearly is and how a hot stone massage can't sort out her problems. Melissa says that Gaby lives a perfect fairy tale and that she doesn't realize the problems real women go through. Gabrielle gives up, pulls out her cell phone, and begins to phone Carlos. She brags to the girls how she doesn't need their help as her capable husband will come to her rescue. Carlos picks up and Gabrielle explains the situation. Carlos agrees to come and help her out. "Thanks, you're a life saver!" Gabrielle shouts, and looks back at Cindy, Rachel and Melissa deviously. Back at the Solis home, the camera pulls back and reveals that Carlos has drunk the whole bottle of alcohol he was eying up earlier. He is clearly drunk. He puts the phone down and takes a huge swig of the remaining alcohol.

Later, Gabrielle is trying her best to get the hall ready for the appreciation night. She is reading a manual to the sound system and plugging in different color cables. The system makes a horrible squeaking sound and Gaby yanks the cables out of the sockets. Cindy cracks a snarky joke and the other PTA moms all laugh. "That's hilarious, Cindy!" Gabrielle replies, "You know you should've been a comic instead of a pint-size pain-in-the-ass!" Cindy looks at Melissa's watch and talks about how late it's getting and how Gaby's "perfect husband" hasn't showed up yet. Just at that moment, Carlos enters through the hall's double doors. Carlos is drunk and walks over to Gaby, but trips over some nearby chairs and collapses onto the floor. Cindy and the others stand up, anxiously. Gaby walks over to comfort her husband, but smells the alcohol on his breath and takes a step back. "Oh Carlos, you can't be here like this - you've gotta go!" Gaby whispers, as she looks back at the PTA moms. Carlos insists on helping, as Gabrielle desperately pulls at his arm and pleads and begs for him to leave. Carlos takes a seat on one of the chairs and Gaby looks back at Cindy, clearly shaken and frightened. "Rachel, help Gaby set the sound board up," Cindy orders, "Melissa, Megan, start putting out the food." Melissa originally refuses to help, but after another order, she quickly gets up and dashes off to help. Gaby looks around as Cindy walks over. "It's okay Gaby - we've got it" she says. Gabrielle doesn't know what to say and she shrugs. Cindy takes Gaby's arm and tells her to take care of her husband. ("The Art of Making Art")

Retrieved from "https://desperatehousewives.fandom.com/wiki/Melissa?oldid=75433"
Community content is available under CC-BY-SA unless otherwise noted.