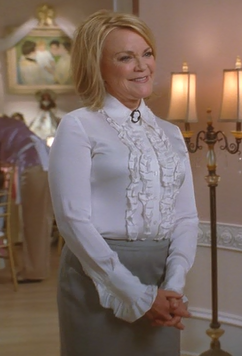 Miss Charlotte was the owner of a doll shop in Fairview, Miss Charlotte's Doll Academy, and later helped fuel Gabrielle Solis' obsession with the doll she purchased there.

At some point in her life, Miss Charlotte developed an obsession with dolls and opened a store in Fairview named Miss Charlotte's Doll Academy.

Gabrielle takes her daughter Juanita to the doll shop to get her a present that will make her forget about the revelation she was swapped with Grace Sanchez at birth, and that therefore she is not Gaby's real daughter. Miss Charlotte shows Juanita a doll in a green dress named Lady Catherine, of the high elite. Juanita is blown away, but as soon as Gabrielle picks up her cell phone to take a picture and looks at a picture of Grace, Juanita sees her and becomes very angry, telling her that she doesn't want the "stupid" doll anymore. They both leave, and Miss Charlotte picks up Lady Catherine and gives her a sad look. At the end of the episode, Gabrielle goes back to the store and takes home a doll whom she names Princess Valerie. Miss Charlotte assumes the doll is for her daughter, but Gaby claims it's really for her. ("Assassins")

Gabrielle visits Miss Charlotte at the doll emporium so that she can get her doll fixed, after Juanita and Celia have broken it, and asks her if she finds it strange that she has become so attached to a doll, so much that even leaving her at the store to get fixed breaks her heart. Miss Charlotte says it's perfectly natural, although most people will probably never understand it. She asks Gaby to follow her, which she does. In the back of the store, Miss Charlotte introduces a doll named Mrs. Humphries to Gaby, one that has been her companion for many years, since she was a child. Miss Charlotte states that the doll has an interesting backstory, having opened a business around the same time she did. Gaby finds this odd, asking her whether the doll has told her this, to which the store owner replies that dolls can't talk, but they make great friends nonetheless, mostly because they never leave you. Mrs. Humphries lost a sister around the same time Miss Charlotte did, and they have made each other happy ever since. The doll serves as a coping mechanism for the middle aged lady, as much as it is starting to do the same for Gaby. Miss Charlotte asks her what her doll's backstory is, and Gaby, hesitant at first, says she is a princess, but she wasn't always one, mainly because she was switched at birth, but now that she had come back home to the castle, her mommy was never gonna let her go, and she was going to remain a princess forever. At home, Gaby hides the doll in a box and puts it on the top shelf of her closet. ("Where Do I Belong?")

Retrieved from "https://desperatehousewives.fandom.com/wiki/Miss_Charlotte?oldid=73537"
Community content is available under CC-BY-SA unless otherwise noted.