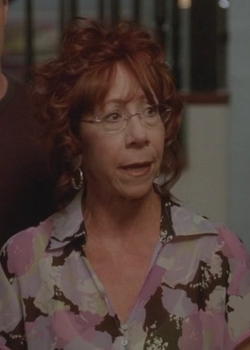 Mitzi Kinsky is an annoying and selfish resident of Wisteria Lane who many residents have a disliking for.

She was abused by Angie Bolen after she refused to recycle her trash.

When Susan set up a yard sale, Mitzi attempted to buy a dining table way under the asking price, but she was scolded by Karen McCluskey and asked to leave by Susan.

Because of financial problems, Paul saw Mitzi as an easy target to get his final house for the Halfway House he was setting up. But, Mitzi refused to give into Paul's demands saying "she wasn't going to screw over her neighbours". Paul Young then called Mitzi, pretending to be another man, saying to meet her at a hotel. When she left, Paul pretended that she had sold her house to make Lee and Bob sell their house.

When the riot had started in the street, Mitzi pointed out Bob and Lee, who were hidden in their car.

Weeks later, Bree asked Mitzi to get her self tested to see if she was a possible kidney donor for Susan, but Mitzi simply replied by saying "No" five times before slamming the door in Bree's face. Later on, at Bree's "trap" party, Mitzi finally gave in and got herself tested; however, she was not a match.

After Mike Delfino's death, Mitzi sent Susan a basket full of homemade jam in jars. The jam was later used by Susan and MJ to let out their anger.

Retrieved from "https://desperatehousewives.fandom.com/wiki/Mitzi_Kinsky?oldid=87966"
Community content is available under CC-BY-SA unless otherwise noted.