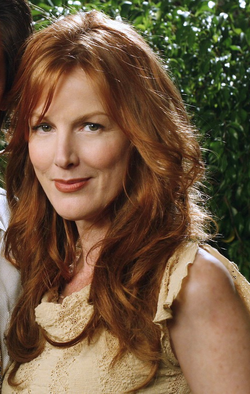 Monique Polier was a French flight attendant who had an affair with Orson Hodge.

Monique Polier had affairs with both Harvey Bigsby and Orson Hodge whilst they were married to Carolyn Bigsby and Alma Hodge respectively. Upon finding out her son was cheating on Alma with Monique, Gloria Hodge went to Monique's house to try and warn her to stay away from Orson but she ended up murdering her by hitting her on the head with Mike Delfino's wrench. Mike had at the time been fixing Monique's sink and stepped out to get an extra part. Gloria convinced Orson that she had killed Monique in self-defense and upon Mike's return, Orson paid him and ushered him out of the house quickly so that he and Gloria could bury Monique. Memory loss and the presence of Mike's number written on Monique's hand implicated Mike in Monique's death. Bree Hodge found Monique's teeth under Alma's floorboards as Gloria had removed them so that police couldn't identify Monique's body. Gloria and Orson buried Monique but a heavy rain washed away the mud in a construction area revealing Monique's body.

Retrieved from "https://desperatehousewives.fandom.com/wiki/Monique_Polier?oldid=89840"
Community content is available under CC-BY-SA unless otherwise noted.