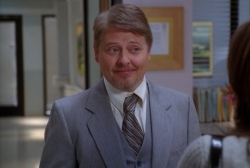 Monroe Carter was a high school classmate of Susan Bremmer.

Monroe attended the same high school as Susan, and developed a crush on the girl. However, the two were in different leagues - Monroe was unpopular and Susan was an attractive cheerleader. Monroe developed an obsession with Susan, and made a photo album of pictures he has taken of her over the years.

As Susan begins her long wait for a kidney donor with the same DNA as her. She runs into Monroe, an old high school classmate who has tried to "friend" her on Facebook 12 different times. In mid-conversation, Susan bursts into tears because of her 4 year wait for a donor. Clearly touched, Monroe gets his DNA tested and decides that he will give Susan his kidney. When Susan finds out, she is overjoyed and she gives Monroe a big hug, which pleases Monroe. Susan realizes Monroe has been obsessed with her since high school; there’s a photo album filled with pictures of her among other things. Susan finally breaks it to Monroe that even though he’s giving her a kidney, he’ll never be more than just a friend to him. Disappointed, Monroe decides he won't be giving Susan his kidney, putting her back on the list.

Retrieved from "https://desperatehousewives.fandom.com/wiki/Monroe_Carter?oldid=83418"
Community content is available under CC-BY-SA unless otherwise noted.