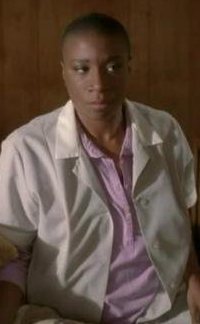 "The Motel Maid" was a cleaner who worked in the motel in which Bree and Karl regularly visited during their affair. Appearing in the season 6 episode "Everybody Ought To Have a Maid", she walked in on Bree and Karl kissing and quickly apologised for disturbing them. Bree said that it was fine and that they were just leaving. She then left with Karl. Attending to her cleaning business, the Motel Maid was then disturbed by a flustered Bree who had forgotten her earring. She offered to help find it. During the search, Bree got a phone call from her husband, Orson, in which she claimed she was at the store and would be home soon to cook for him. Hearing this conversation, the Motel Maid found the earring and gave Bree a strong look of disapproval when she left the room.

The next day in a restaurant, Bree told Orson that a member of staff in a "coffee shop" had been very rude to her and she wasn't very happy about it. Poor innocent Orson then told her to go back and speak with the woman and demand some common courtesy.

Later on, Bree returned alone to the motel, seeking out the maid. Finding her cleaning a room, Bree began to help the maid with her chores while asking her politely about her behaviour the other day. Bree claimed that the Maid would understand if she saw her marriage but got a punch in the gut when the Maid pointed out that Orson had offered to go to the store himself and obviously cared about Bree deeply. Using her own experience as a guide, the Maid told a story of how she once had an affair and has since lost everything: her husband, her boyfriend, her house and is stuck cleaning motel rooms. She urged Bree to get out before it was too late

Bree spent the next few days taking this advice to heart and experiencing a mass amount of guilt about her afair, but ultimately decided to continue with it, unaware of the consequences that were sure to follow.

Retrieved from "https://desperatehousewives.fandom.com/wiki/Motel_Maid?oldid=87907"
Community content is available under CC-BY-SA unless otherwise noted.