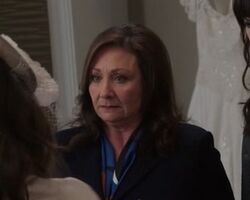 This unnamed woman is the mother of a bride-to-be whose wedding dress was stolen by Renee Perry.

The limo containing Julie, Susan, Gabrielle and Renee arrives at Cumberly's, and Gabrielle and Renee rush into the bridal department, with Gaby telling the bride that the size 6 outfits are in a determined area. Renee is somewhat offended by this remark, but Gaby tells her not to lie. They start sorting through the outfits and Renee is disgusted by all of them, but she then notices a beautiful wedding dress being examined by a mother and her young bride-to-be daughter. Renee points out that she loves the dress and tries to reach for it, but the mother pulls it out of her reach. Renee asks when the young woman's wedding is, and is told it's three months away. Renee says hers is in five minutes, yanks the dress from the woman's hands, turns her back to her and tells her to unzip the dress she's wearing. Both the mother and her daughter are shocked at the nerve of the bride in front of them. They are then seen complaining about this to Kent, an employee. ("Finishing the Hat")

Retrieved from "https://desperatehousewives.fandom.com/wiki/Mother_(8.23)?oldid=80674"
Community content is available under CC-BY-SA unless otherwise noted.