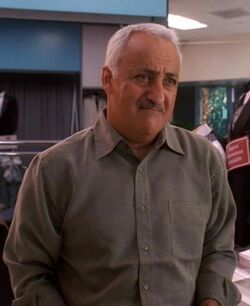 Bree Van de Kamp and her mother-in-law, Phyllis, are seen at a dry cleaning store, operated by Mr. Pashmutti. He is seen talking to some customers after handing them their clothes, and Phyllis tells Bree that him chatting away is so inconsiderate. Bree reminds her that they have only been waiting for two minutes, and she herself reminds Bree that when they left the house she'd told her she needed to eat. Phyllis then asks if (because she has a low blood sugar level) Bree wants to see her keel over. Bree responds with "No. In theory." When Mr. Pashmutti finally gets to them, he tells Bree he's heard of her husband's passing, and that he is terribly sorry. He adds that Dr. Van de Kamp was truly one of his favorite customers. Bree replies that that's very sweet of him, and thanks the man.

When she begins to turn away, he stops her and insists that he's not just being polite, then asking her how she's doing. Phyllis cuts in front of Bree and tells the man that they're doing the best they can under the circumstances. Bree introduces Phyllis to Mr. Pashmutti as Rex's mother, and he tells her he is very sorry about her son. Phyllis thanks him, and goes on to say that the hardest thing is to lose a child. Bree tries to rush her, and Phyllis tells the owner that they had no warning, and she herself was doing dishes when she got the call. Bree reminds her that there are people waiting, and so she starts to leave. The woman after her steps in front and Phyllis addresses her, apologizing for keeping her waiting, and adding that her son has just died. The woman tells her she's so sorry, and Phyllis explains that she was just telling Mr. Pashmutti that her life is over. She starts to breakdown, and Bree becomes angry.

Retrieved from "https://desperatehousewives.fandom.com/wiki/Mr._Pashmutti?oldid=77343"
Community content is available under CC-BY-SA unless otherwise noted.