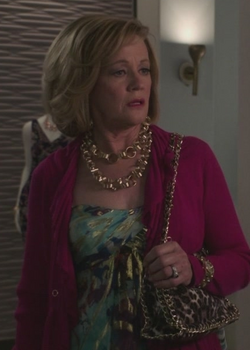 Mrs. Howe is one of the female customers seen at Cumberly's in the episode "With So Little to Be Sure Of".

At Cumberly's, Gabrielle Solis, working there as a new personal shopper, is sitting on a chair, clearly bored, when a middle-aged female customer, Mrs. Howe, walks in. Gaby anxiously gets up and welcomes her to the personal shopping service. She asks if she can help with something, and falsely comments on how they have 'very similar taste'. The snobbish woman says that she always works with Margaret, and asks if she's there. Gaby comments that Margaret's sense of fashion is wearing one normal shoe with one clunky shoe. "She has a prosthetic leg.", says the women, appalled by Gaby's nerve. "And that's why she's my hero.", Gaby says, trying to redeem herself. The lady isn't convinced and walks away.

Retrieved from "https://desperatehousewives.fandom.com/wiki/Mrs._Howe?oldid=77810"
Community content is available under CC-BY-SA unless otherwise noted.