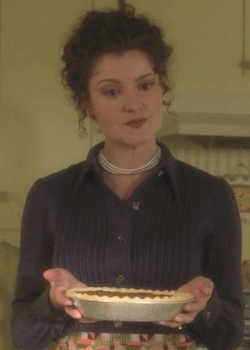 Mrs. Mason is Bree's mother and Henry Mason's wife. She died when she was hit by a drunk driver in her driveway just before Christmas. Bree then proceeds to clean her blood up off the road, she later states that once everything was clean she felt much better. This may explain Bree's need for everything to be clean. Because of her death, Bree became closed off from everyone. After her death, Bree's father married Eleanor.

Bree used to make peanut butter cookies that her mother loved. Also Bree has a cherished family recipe for mincemeat pie from her mother that Katherine Mayfair claimed was from a Betty Crocker cookbook.

She is seen for the first time in a flashback in season 8, where she teaches a young Bree about how to "mask" her emotions. She also reveals that Henry was having an affair with his secretary, whom is presumably Eleanor due to the fact that the two married shortly after.

Retrieved from "https://desperatehousewives.fandom.com/wiki/Mrs._Mason?oldid=89752"
Community content is available under CC-BY-SA unless otherwise noted.