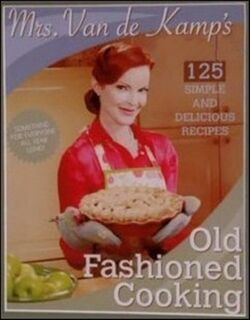 Bree and Katherine decide to set up the company after they successfully cater for the Founders' Day Ball.

Sometime in the five year jump between Season 4 and 5, Andrew starts working for the business, and is quickly promoted to company president.

Bree also publishes her own cookbook (in conjunction with the company) and becomes Fairview's most famous chef and making her very wealthy. This takes a toll on Katherine who feels she is being pushed into the background.

After Orson's imprisonment, he loses his dental practise and can't find a job, so he becomes a partner in the company and successfully runs it alongside Bree. However, Orson eventually becomes jealous of Bree's success, and eventually tries to blackmail her into selling it - Bree goes against her husbands will, and continues running the company despite the negative effect it is having on her marriage.

Bree fires Katherine after her break up from Mike Delfino and for intentionally scratching Bree's car. Bree then hires Angie Bolen as one of the company's chefs, due to her expert knowledge of Italian cuisine.

At the end of Season 6, Bree transfers the ownership of the company (along with all other business ventures: frozen food line, cooking utensils, and publishing deals) to Sam Allen - Rex's illegitimate son - after he blackmails her.

Retrieved from "https://desperatehousewives.fandom.com/wiki/Mrs._Van_de_Kamp%27s_Old_Fashioned_Foods?oldid=84419"
Community content is available under CC-BY-SA unless otherwise noted.