Start a Wiki
watch 01:22
The Loop (TV)
Do you like this video?
My Heart Belongs to Daddy 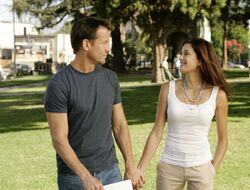 "My Heart Belongs to Daddy" is the 27th episode of Desperate Housewives.

As part of her normal routine, every Tuesday afternoon Gabrielle visits the Eagle County Prison much to the delight of the prisoners. Each time Gabrielle visited the gestures would become more and more bizarre, as the prisoners became increasingly annoying to Gabrielle. The prisoners turn out to be an advantage to Gabrielle one afternoon when Carlos' lawyer refuses to give Gabrielle a conjugal visit. When the lawyer makes a snide remark about her affair, Gabrielle slaps him. When he tries to retaliate, a prisoner from behind the fence threatens him not to and a prison riot ensues. Carlos' lawyer dismisses his case and Gabrielle must meet a new lawyer. The new lawyer turns out to be a very handsome young man named David Bradley. David's past history includes sleeping with many clients' wives and Gabrielle Solis is no exception. At the moment of their meeting, David tries to pursue her but Gabrielle catches quick on and is not interested. Gabrielle makes her case firm and demanding, she wants a conjugal visit by the following day or to consider himself fired. Gabrielle gets what she wants but wonders of Carlos' future and the future of their family if Carlos is forced to spend 8 years behind bars.

Bree enjoys a pleasant evening talking with George outside of her home which is rudely interrupted by her son, Andrew. When George refuses to leave, Andrew begins to shove George which ends with Bree having to break the two up. Bree wants everyone to get to know each other so she plans a dinner for Friday evening. At the dinner while Bree and Danielle are washing dishes, Andrew fills George in on Bree and Rex's sex life before his death. The discussion ends with Andrew imitating Bree's pleasurable moan which she eventually does when she bites into her peach cobbler. George quickly leaves when Bree will not take his side on Andrew's bad conduct. The following day over watermelon, Bree tells George that they should not start their relationship so quickly since she and the children need time to grieve. George understands but then continues to ask Bree about Andrew's experience at Camp Hennessy (which was several months before) and whether he should go back for counselling. Bree decides that only if he does something drastic he will be sent back. At Andrew's swim meet, George arrives uninvited and sits next to Bree. He gives her a token of affection by replacing her broken china pattern. George then tries to kiss Bree. Andrew sees this and jumps out of the pool and on to George. The two fight until the coach steps in and pulls Andrew aside. Bree cares for a Bloody George and that evening Andrew packs his bags for Camp Hennessy.

Susan tries to bring back the "spark" with her relationship with Mike. Susan feels that she is finally ready to accept Zach into her life and would like to help him find Zach before anything else happens. The following day, Mike and Susan walk through the park and hand out fliers containing a picture of Zach on them. Shortly after, Susan takes a break to buy ice cream and spots Zach sitting on a park bench. When Zach sees her he quickly runs away and Susan chases after him. Susan finally gets closer but Zach shoos her away with a large piece of lumber. When she meets up with Mike, she says she has not seen him. Later at Gabrielle's over wine, Susan tells the wives of her encounter with Zach and asks what she should do. Bree decides that they should help Zach since he was Mary Alice's son but Gabrielle figures otherwise. Susan returns to the park the next day and meets Zach lying on a bench. Susan tells him not to leave but he cannot since he hurt his foot trying to run. Susan buys him lunch at a local diner and assures him that his father, Paul is alright. Susan tells him that because of what he has done in the past he has hurt a lot of people whom Zach thinks is Julie. Susan thinks of her daughter and decides to give Zach money to go and find Paul in Utah. She goes on her way and does not tell Mike of their meeting.

Lynette has been very busy at work and has had little time for family life due to her long hours. Lynette and Tom's youngest son, Parker seems to take it the hardest and creates an imaginary friend, Mrs. Mulberry (a parody of Mary Poppins) to cope. When Lynette finds out, she tries to be more involved but wherever Parker goes: Mrs. Mulberry must follow. After Parker's behavior and protection of Mrs. Mulberry becomes more and more demanding (e.g. a desk and easel) and Lynette is called in for a parent conference she decides its time for Mrs. Mulberry to leave. Lynette throws "Mrs. Mulberry's" umbrella in the trash and prays that it will be gone by morning. The umbrella quickly falls out of the truck though and into the Scavo carport. Parker begins to look frantically for the umbrella but Lynette tells him that she is gone. However when they leave for school, Mrs. Mulberry is patiently waiting in the street but as Parker runs to get her a truck drives past and destroys the umbrella. Parker runs to Lynette and she tells him that Mrs. Mulberry is gone and will not be coming back. That evening, Lynette sobs in bed as she feels guilty of what she did to "Mrs. Mulberry" but Tom reassures her that she did the right thing for Parker.

Retrieved from "https://desperatehousewives.fandom.com/wiki/My_Heart_Belongs_to_Daddy?oldid=89115"
Community content is available under CC-BY-SA unless otherwise noted.