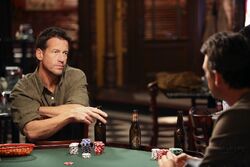 "My Husband, the Pig" is the 63rd of Desperate Housewives.

This is a male-focused episode which is narrated by Rex Van de Kamp.

Mike Delfino returns the engagement ring he had planned on giving to his ex-girlfriend Susan Mayer and the jeweler notes the inscription on the inside dedicated to Susan. At that moment Susan walks in with her engagement ring from her new boyfriend and fiancé Ian Hainsworth; she wants to have the ring resized as Ian bought the wrong size. The jeweler takes the ring that Mike was returning and uses it to size Susan's finger--and it fits. A poker game with all the husbands and bachelors from Wisteria Lane leads to a face-off between Ian and Mike. After selling back the ring he is able to repay Ian for the lawyer he hired for him. However, with Mike quickly losing out on money, Ian offers a new stake saying that if Mike wins the hand he can tell Susan whatever he likes, but if Ian wins Mike cannot utter a word. Mike has 3 kings and 2 queens, and so believes he will win. He loses the hand and cannot tell Susan that he was planning to propose the night he was hit by the car.

Familyman Tom Scavo makes a nice romantic gesture for his wife Lynette involving a horse and carriage ride for their ninth marriage anniversary. Naturally, things go awry, but by the end of the episode, they have reaffirmed their love for one another.

Edie Britt gets a visit from her ex-husband, Charles McLain (though he is not shown), and their 9-year-old son, Travers. Charles wants Edie to take care of Travers while Charles is in Africa for a month with Doctors Without Borders. Edie does not want to sit her son, but Travers wants to stay with her so she promises to take care of him. Edie’s neighbour Carlos Solis brings a woman named Kelly to Mike Delfino’s and his house. As they are about to have sex, Carlos notices Travers playing outside by himself, in the dark. Carlos brings Travers inside, which causes Kelly to leave. The end of the episode implies that Carlos is reminded of his desire for a child by this incident.

Danielle Van de Kamp discovers she is pregnant and it is believed by her family that Edie Britt’s nephew Austin McCann is the father. Orson wants Austin to leave town, and he decides that Danielle will go somewhere else to give birth to the baby and then give it up for adoption; the cover story being that she is taking a semester abroad. Austin writes his ex-girlfriend Julie Mayer a heartfelt letter and she agrees to take him back, not knowing about Danielle’s pregnancy. Austin tells Julie he has to leave for a while for “a family thing”.

Victor Lang, a rich man in his midforties, tells his chauffeur to rear-end Gabrielle Marquez’s Aston Martin DB9 Convertible on purpose so he and Gabrielle can meet. The next day, Gabrielle goes to Victor’s office and finds him being interviewed and photographed. He is running for mayor of Fairview. She agrees to go out with him, and though they have a pleasant date, she does not think he is the right man for her. Still, he is seen confidently telling a waiter he was going to marry “that girl”.

Retrieved from "https://desperatehousewives.fandom.com/wiki/My_Husband,_the_Pig?oldid=89229"
Community content is available under CC-BY-SA unless otherwise noted.