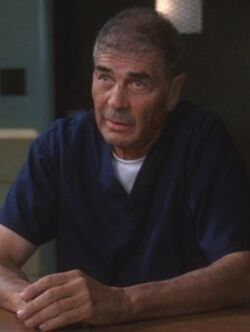 When Mike and Susan begin dating Mike had first told Susan that his father was dead. However when Mike and Susan meet with a doctor to talk about their families history's health Mike reveals that his father is alive. Susan confronts Mike and asks him why he said his father was dead then Mike finally confesses to her that his dad is in prison for murder. Susan insists that they go to visit him and Mike refuses however Susan convinces to him that they should do so.

When they visit him Nick tells them that he was angry that a man had got a promotion after he had double crossed Nick. Nick tells Susan he confronted the man and told him what he did wasn't right but when he laughed in his face he strangled him with his tie. At the hotel they're staying at Susan tells Mike her father is a bad guy - he corrects her and says that he is a good guy who did a bad thing.

Susan later visits Nick alone and tells him she can't have a baby who doesen't have a soul as she cannot understand how Nick could kill someone and not feel bad about it. Nick tells Susan he does have a soul and that the one thing he did feel bad for was ruining Mike's life when he was younger and how it got him into drugs. Nick then warns Susan to watch out for Mike as addictions like that don't tend to go away. He turns out to be right when Mike gets addicted to pills.

Retrieved from "https://desperatehousewives.fandom.com/wiki/Nick_Delfino?oldid=90241"
Community content is available under CC-BY-SA unless otherwise noted.