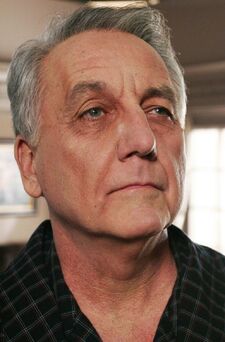 Noah is Deirdre’s father. Deirdre was Mike Delfino’s girlfriend, and the two got addicted to drugs. Mike sobered up and decided to break up with Deirdre, who was at the time pregnant with their son, Dana. Deirdre had told Mike that she had aborted Dana. For years after Deirdre’s and Dana’s disappearance, Noah kept searching for them. He was a connected guy with financial freedom, and was able to track down that the couple who had bought Dana from Deirdre, were living on Wisteria Lane. Noah was diagnosed with cancer and wanted to find his grandson Dana, before he died, in order to tell him the truth about his biological mother, and find out what happened to her. In 2004, Noah sent Mike Delfino to rent the Simms’s house on Wisteria Lane, since he agreed he would would search for his son, and find out what happened to Deirdre.

Noah came off as a bitter old man after being nasty to the local kids in front of Mike. He then reappears when Mike visits his mansion and it is revealed that Noah hired Mike to find his daughter Deirdre. Noah had felt that Mike abandoned his daughter by finding a nice wife. However, it is believed that Noah was exaggerating, and that Mike married his first wife after Deirdre had ran away from home, and after Mike got out of prison. Noah arranged for Mike to murder Deirdre's killer and decided to put him back on his payroll. Noah had fired him because of his slow pace, which was a major flaw due to Noah's brain tumor. Mike later returned with all of Noah's money. Noah appears later to discuss Martha Huber's murder and how her watch got into Mike's garage. Noah points out that whoever did it was the killer of Deirdre. Noah arranged for Sullivan to give Mike the case file on Deirdre's murder and bribed him to keep quiet to prevent Mike from being imprisoned, where Mike discovered that the Youngs had killed Deirdre. Noah appears for the last time in Sunday in the Park with George, where Noah attempts to break up Susan and Mike forever, by giving Susan false information about Mike's criminal records. Surprisingly enough, Kendra comes to the rescue and sets Susan straight.

Noah is on his death bed. He is murdered by his own grandson when Zach Young turns off his life support machine. Zach inherits his entire estate and millions of dollars.

When Paul goes on his search for Zach, he stops by at Noah's old mansion to see if he is there, but he isn't. It turns out that Noah's old house has been foreclosed and Zach has moved out, after losing all of his grandfathers money to drugs, gambling and women.

Retrieved from "https://desperatehousewives.fandom.com/wiki/Noah_Taylor?oldid=89443"
Community content is available under CC-BY-SA unless otherwise noted.