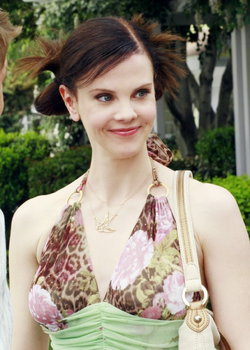 Nora Huntington was a woman who Tom Scavo had a one-night stand with years ago; as a result of it, she became pregnant with their daughter, Kayla. Tom visited his daughter on multiple occasions, but kept the visits a secret from his wife.

Not much is known about Nora's childhood, other than that fact that she was the daughter of Joe Huntington and Sheila Huntington. ("The Gun Song")

Before Tom had even met Lynette, he and Nora had a one night stand together whilst she was working as a dancer on a boat. This resulted in her getting pregnant with her first and only child, Kayla. Nora raised Kayla for several years alone, without any help from Tom as he was oblivious to the fact that he had a daughter and she wanted to raise Kayla alone. However, Nora decided to tell Tom about his daughter when she realized she needed some help. Tom then started to visit Nora and Kayla in Atlantic City to support them and form some sort of a relationship. However, he kept this a secret from Lynette, and said he instead was going there for work. ("Remember, Part 1/Remember, Part 2")

Lynette follows Tom when he leaves for Atlantic City. She follows him to a house where he enters and is served wine by Nora. The two then head upstairs, and this lead Lynette to believe he is having an affair. ("No One is Alone") Tom is forced to come clean to Lynette and he tells her the truth about Nora and their illegitimate daughter, Kayla Huntington. Lynette and Nora clash instantly when Nora throws child support papers in their faces. Tom and Lynette decide to pay her off in order for her to go away, but she uses the money to buy an apartment in Fairview. ("Remember, Part 2")

Lynette struggles to adjust to life including Kayla and Nora. During a family photo for the Christmas card, Nora demands to be in it and then unintentionally ruins it. Nora's behavior leads to her not being invited to Parker's party, but Kayla is. Nora eventually discovers that she was lied to, despite Lynette and Tom's efforts to hide the party, and she tries to take Kayla home, but has a change of heart when she sees her daughter having a good time. ("Listen to the Rain on the Roof")

Lynette is over the moon when Nora starts dating a rough trick, because it means she is around her house and family a lot less. However, things go sour all of a sudden for the recent couple, and Lynette tries to salvage the situation and her happiness by setting Nora up with Tom's friends during her friend Bree's second wedding. Nora, however, soon grows tired of being seated at the 'loser table', and starts keeping Lynette company during the reception... until Lynette unloads her on Carlos Solis, who'd been looking to hook up at the wedding in order to instill jealousy in his wife Gabrielle, whom he's divorcing. Carlos and Nora really hit off right at the gate and start slow-dancing and making out... until Gaby shows up and causes a scene, enraged by her husband's shameless public display of affection for Nora. Nora backs off as the couple argues, but not before pinning it all on Lynette. ("It Takes Two")
During a holiday weekend, Lynette leaves for a spa vacation with her friend Gabrielle, while Tom takes the kids camping. However, the weekend is ruined for both halves of the Scavo couple when Tom's back problems act up again and Lynette is forced to come to his rescue. However, much to her displeasure, Nora decides to hitch a ride with her. During the trip, Lynette grows tired of Nora's childish and obnoxious behavior, and eventually the conversation turns to suicide, with Lynette making it clear to her company that she would be all too able to move on should Nora ever kill herself. This infuriates Nora, who demands that Lynette stop the car so that she can get out. Nora then hitches a ride with an on-passing trucker, and is later rescued by Lynette after he gropes her and she is forced to leave his truck. Nora explains to Lynette that the suicide talk hit home, as she had once actually considered that. Lynette tries to make her company feel better, because Nora's life is indeed better now, but Nora says it's good, but not 'perfect' like Lynette's. Eventually, Nora breaks it to Lynette that her husband Tom, who's been looking for employment, hates the advertising game. Lynette feels somewhat frustrated that her husband confided this in Nora and not her, but is sympathetic later on, encouraging Tom to follow whatever dream he might have. ("A Weekend in the Country")

Tom tells Lynette he plans on opening a Pizzeria, but Lynette is reluctant because of the costs. None of Lynette's friends, including Nora, agree that the idea is a good one. So, Lynette gives Tom some suggestions to make the Pizzeria work. Tom ignores them all and insists going with his dream. Nora points out to Tom that Lynette is a bully and she's making him do what she wants. At night, when putting Kayla to bed, she tells Nora she wishes Tom could tuck her into bed every night, so Nora assures her she's "working on it".("Nice She Ain't")

After showing Lynette the dump he bought to be the Pizzeria, Tom is kicked out of the house in rage. Nora discovers this and they have a meal together, with wine. Nora tries to kiss Tom, but he pulls away, angering Nora. Tom returns home and apologizes to Lynette. He also tells her about Nora's kiss, so she confronts Nora, and warns her to stay away from her family from now on. ("Sweetheart, I Have to Confess")

After the threat from Lynette, Nora announces she's leaving for Mexico with Kayla, so Lynette suggests fighting for full custody of Kayla to Tom. Nora later finds Lynette at a supermarket and they start arguing. However, they are stopped by Carolyn Bigsby, who is trying to get revenge on her husband for cheating on her. Carolyn takes everybody hostage, including Lynette and Nora. They try to escape but get caught. Nora tries to get into an argument with Lynette and Lynette asks her to shut up four different times so they don't draw Carolyn's attention. Nora does draw Carolyn's attention and says that Lynette wants to take her child away. Lynette defends herself when Carolyn gives her a look that was almost as deadly her gun and she tells Carolyn that Nora made a move on Tom. This comment angers Carolyn and she shoots Nora in the chest. Lynette and Art Shephard try to save her, but Nora is mortally wounded. Nora asks Lynette to take care of Kayla. Lynette promises to do so and raise Kayla like she is her own. Nora then rests her head down and dies. ("Bang")

After Nora was shot and killed and Lynette was shot at the supermarket, Parker becomes protective over his mother. Lynette attempts to show him that she's safe by getting new neighbour, Art, to pretend to be a superhero. ("Children and Art")

After losing her mother, Kayla moves in with the Scavo family. During dinner, Kayla wants to eat her food in front of the TV, but Lynette won't allow it. Kayla insists that Lynette let her do it because Nora let her. Lynette allows her to "just this once". Later, Lynette takes the children out for ice cream, but when they have to leave, Kayla refuses to because she wants to finish her ice cream, but Lynette can't wait for her. Kayla tells Lynette that she doesn't have to listen to her because she's not her mother. Lynette tells her boys that if they get Kayla into the car, they can eat dinner in front of the TV for a week, so they do. That night, as Tom tucks Kayla into bed, he asks her why she is giving Lynette a hard time. She tells him that she blames Lynette for the death of her mother. Tom asks her to be nicer to Lynette, so Kayla says she will, but that doesn't mean she loves her. Lynette is hurt when she overhears this. ("No Fits, No Fights, No Feuds")

After Kayla is revealed to be the mastermind behind the arson at Rick Coletti's restaurant, perpetrated by her siblings Porter and Preston, Lynette grows worried that the young girl is troubled, and even brings up the fact that her mother, Nora, was kind of a 'psycho'. ("Opening Doors")

When Susan Delfino decides to leave Wisteria Lane with her children, MJ Delfino and Julie Mayer, and granddaughter, Nora's ghost appears alongside Ellie Leonard and Karl Mayer at Wisteria Park, and they watch the family as they drive away from the lane and begin their new lives together. ("Finishing the Hat")

1 of 2
Add photo
Retrieved from "https://desperatehousewives.fandom.com/wiki/Nora_Huntington?oldid=89634"
Community content is available under CC-BY-SA unless otherwise noted.