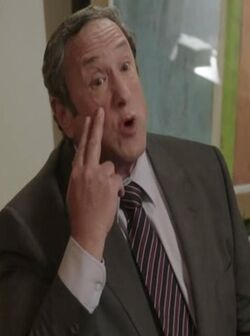 In the episode "You Take for Granted", Gabrielle Solis, Carlos' wife, enters the premises of Global Group Venture, after being called in by the secretary, Marilyn, and makes her way through a line of blue-collared men formed outside of her husband's office, and asks Marilyn what's going on. Marilyn sits quietly as the rambunctious man next to her reveals to Gabrielle that Carlos is giving away all their money. Gaby asks Marilyn who the man is, to which she replies that it's Patrick McDonald, their CFO. Patrick starts explaining to Gaby what all those simple men are doing there: a while back, they took over a steel company, chopped it up, sold it and made a nice profit, and these men are some of the workers who got laid off. Gaby asks what they are doing there, and is told that Carlos has taken it upon himself to make things right, by writing each of them a cheque for $50'000. Gabrielle quietly panicks, and rushes off to take a peek inside Carlos' office, followed by Marilyn and Patrick. He is inside, having a talk with a steel worker and his son. Patrick tells her that if he keeps this up, they'll be bankrupt in a couple of weeks. Marilyn then lowly tells Gabrielle that she is a party girl with a taste for young Brazilian gentlemen, so she really needs this job. Gaby says "I'm on it", and enters the office. Patrick can't help but stare at Marilyn because of what she just said.

Retrieved from "https://desperatehousewives.fandom.com/wiki/Patrick_McDonald?oldid=77344"
Community content is available under CC-BY-SA unless otherwise noted.