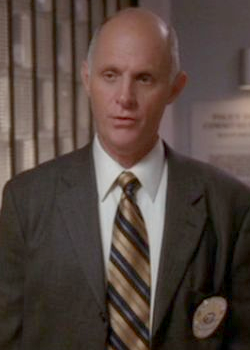 Pete Romslo appears in the Season 2 premiere "Next" and the Season 4 finale "Free".

After Susan and Mike were held at gunpoint by Zach Young, they were both questioned in the hospital by Officer Romslo. Susan gives her version of events until Julie tells Romslo that she is a mess and should talk later. He and Mike then exit into the hall. When Julie goes to get Susan more ice she over hears Mike telling Romslo not to press charges on Zach.

Pete Romslo later calls Susan and Mike to the morge to identify a body who was thought to be Zach Young however it was not. Susan then realized by Mike's reaction that Zach was Mike's son. ("Next")

Romslo (now promoted to detective) is who Katherine goes to report that Wayne Davis had kidnapped her husband Adam Mayfair. Pete tells Katherine that he and Wayne are good friends and that he would never hurt anyone. He later calls Wayne and tells him that Katherine had stopped by and that she was crazy just like he said she was.

After Katherine killed Wayne, Romslo told Katherine that it was obviously self-defense and she should go to the hospital right away. ("Free")

Retrieved from "https://desperatehousewives.fandom.com/wiki/Pete_Romslo?oldid=88986"
Community content is available under CC-BY-SA unless otherwise noted.