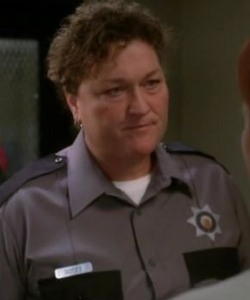 This Prison Guard was a woman who worked at the prison Orson Hodge was sent to.

We see a prison guard outside a visiting room call for Bree Hodge. Bree stands up and gets ready to follow the guard into the room, but when she sees all the other prisoners sat inside the room, she has a change of heart. She takes a few steps away from the room and asks the guard if that it’s the visitor’s room. The guard says it is and asks why. Bree asks if they have a private room, so the guard mockingly asks “like an upgrade?” Bree says that would be lovely, but suddenly realises she was being sarcastic. The guard then asks Bree if she’s ready to go in, but Bree suggests that having an upgrade might not be a bad idea and it’d be a perk people would be willing to pay for. However, the guard doesn’t allow Bree’s suggestion. Bree then says that she isn’t feeling up to visiting Orson, so she’ll come back another day. The guard says that it’s fine, because he has another visitor coming in anyway. Intrigued, Bree asks whom, so the guard replies “just some lady” and says she visits him every week. Bree asks her name, but the guard refuses to say. Bree then says if a woman is visiting her husband, then she has a right to know. However, the guard still refuses to say the name. Bree then tells the guard that getting the woman’s name is a perk work paying for, insinuating she wants to bribe her. ("Look Into Their Eyes and You See What They Know")

Retrieved from "https://desperatehousewives.fandom.com/wiki/Prison_Guard_(5.19)?oldid=73550"
Community content is available under CC-BY-SA unless otherwise noted.