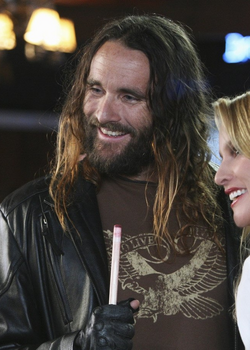 Reggie is a friend of Edie Britt who she introduced to Lynette when she took her to a bar.

Edie and Lynette both enter a biker’s bar. When the men, who are playing pool, drinking beer and talking to each other, see Edie they all look and yell her name, welcoming her. Edie sticks her arm in the air and cheers happily. Lynette, realising the men know Edie well, asks if she’s been before, to which Edie replies “a couple of times”. Edie then takes Lynette towards the bar and says that Lynette will love it at the bar. Lynette says that she has cancer so she probably shouldn’t use the ladies room in the bar, but Edie says it’s fine because there isn’t a ladies room. When they reach the bar, Lynette, feeling reluctant, says she has chemo in half an hour, so Edie says they better start drinking. Lynette tells Edie that she’s not supposed to drink. Edie then says that the people in this bar aren’t supposed to do tattoos in the kitchen, but she has a bald eagle on her ass that says otherwise. Just as Edie calls for two tequila shooters, a man, Reggie, approaches Edie and they both greet each other. Edie then introduces Reggie to Lynette and she says that she’s trying to cheer her up. Reggie asks Lynette if she wants to play pool with her, but she says she can’t because she has cancer. Reggie then pulls off one of his arms, a plastic arm, and tells Lynette that he’ll play her one handed to make it equal. Shocked by Reggie’s arm, Lynette excuses herself and Edie from him. When they’re alone, Lynette tries to remind Edie that she has cancer, but Edie finishes her sentence, saying she knows. Lynette asks what Edie wants from her, so Edie tells her that she needs to start fighting her illness. Lynette, becoming upset, says she’s doing the best she can, but Edie says she isn’t and that she’s the strongest person she knows. Edie says she may be out of line bringing Lynette to the bar, but that Lynette needs to remember who she is. She then says “Screw cancer, you are Lynette Scavo”. After listening to Edie, Lynette tries to contain her tears. When the tequila shots arrive, Lynette grabs one and drinks it. Edie smiles, and then Lynette asks where Reggie is so she can play some pool. ("Look Into Their Eyes and You See What They Know")

1 of 3
Add photo
Retrieved from "https://desperatehousewives.fandom.com/wiki/Reggie_(5.19)?oldid=77359"
Community content is available under CC-BY-SA unless otherwise noted.