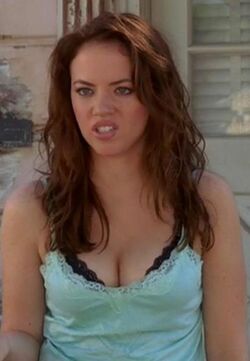 Rita Rivera was the girlfriend of Richie, a guy who threatened Carlos Solis in jail in order for him to give Rita seven thousand dollars for a breast augmentation surgery.

After being threatened by Richie in jail, Carlos Solis sends his wife, Gabrielle, to give Rita the money.

Later, Gabrielle arrives at a seemingly bad neighborhood, filled with run-down houses, and she's carrying an envelope with the cash Carlos had told her to bring. She approaches a woman who is shucking corn, sitting on the front stoop of a house, and tells her that she is looking for a "Rita Rivera". The woman bangs her can on the door right behind her, and a trashy-looking woman shows up. Gabby asks her if she's Rita, to which the woman replies "Yeah. Who are you?"; Gabrielle introduces herself, and tells her that their husbands are roommates at the prison. Rita says that Richie and her aren't married, and Gabby then corrects herself, saying that Rita's boyfriend asked her husband to give this (she hands her the envelope) to her. Rita takes the envelope, checks it, and Gabrielle tells her that the seven thousand dollars are all there. Rita seems angry, lets out a "Son of a bitch!" and throws the cash to the floor, then storming inside the house, closing the door behind her. The woman chucking corn looks at the money and then back at Gabby, who says "Oh, don't even think about it"; she begins collecting the cash and calls out for Rita, asking if there's a problem. Rita comes out of the house, takes Gabby's cash from her, and says she's got a question for her, which might seem kinda weird: what does she think of her breasts? Gabby is surprised and tells her they're nice. Rita genuinely thanks her, and says she likes them too. Gabby tells her "You're right, that was weird", and then she turns her back and starts to walk away. Rita stops her, saying "You have no idea what this money's for, do you?"; Gabby replies that she doesn't, as it seems as though Rita's got everything she needs. Rita tells her that Richie wants her to get a boob job, as he's obsessed with huge breasts. She then begins counting the money, and Gabby promptly asks her if she's gonna go through with it. Rita explains that she had told him if he managed to come up with the cash, she would, she just never thought the moron would actually be able to come up with it. Gabby tells her that, even though it's not really her business, it is Rita's body, and she herself wouldn't change anything unless she really wanted to. Rita explains that if she doesn't, her boyfriend will leave her, and Gabby adds that he's in jail, so he can't really go far. She says that maybe it is time Rita stood up for herself and tell her boyfriend that she doesn't need the surgery, and Rita says it's worth a shot. Gabby smiles and says "There you go. I'm so proud of you", immediately taking the money back from Rita's hands, and walking away.

Retrieved from "https://desperatehousewives.fandom.com/wiki/Rita_Rivera?oldid=86231"
Community content is available under CC-BY-SA unless otherwise noted.