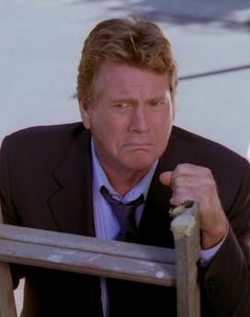 Rodney Scavo is Tom's father, appearing in "Your Fault".

Rodney Scavo is Tom's father, married to Allison, who is Tom's mother. Rodney comes for a visit to see the family and Lynette winds up walking in on him with a woman who is not his wife. When Rodney refuses to be ashamed for his actions, Lynette tosses him out of the house. His visit spurs a frank conversation between the Scavos about commitment and fidelity. And then, when Tom admits to Lynette that he knew about his father's affairs and isn't that bothered by it, Lynette tosses him out.

Tom and Lynette explained everything, but before Lynette went to sleep, she told her husband that if she betrayed her, she would leave and take the children away. Tom, slightly shaken, went down to the kitchen and confessed to his father that he had a secret about which his wife could not find out. This secret was about Renee Perry.

Retrieved from "https://desperatehousewives.fandom.com/wiki/Rodney_Scavo?oldid=89987"
Community content is available under CC-BY-SA unless otherwise noted.