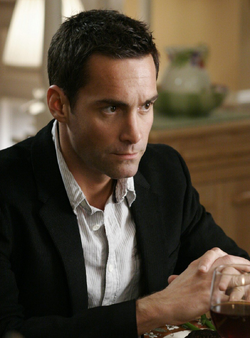 Dr. Ron McCready was a physician and surgeon operating at the Fairview Sacred Heart Hospital, who used to date Susan Mayer.

Susan Mayer goes out on a blind date with Jim Halverson, a jokester, and the evening is atrocious, seeing as how he keeps telling her awful jokes. Eventually, the two bang their heads by accident and Jim winds up losing consciousness. At the hospital, Jim won't cease telling bad jokes even whilst being treated by his phyisican, Dr. Ron McCready. Susan begs Dr. McCready to come up with an excuse for her to be admitted so that she can get out of this bad date, but the doctor won't budge... until he sits through a couple of Jim's bad jokes and sympathizes with Susan, telling him he's gonna have to stay there overnight to run some more testes. Later, Susan, charmed by Dr. Ron, comes to the hospital for a physical, pretending to exhibit several made up symptoms. The following morning Dr. Ron comes over to her house to announce to her that he is unclear of what her condition is, even though he spent all night looking it up. Susan confesses to him that she made all those symptoms up because she wanted to see him again. Ron is maddened by this, and leaves, telling her he doesn't like to have to tell people he likes that he thinks they're going to die. Susan is mostly caught by the part that he likes her, and asks if he'd like to go out on a date with her. Though still mad, he agrees to. He also sort of nonchallantly announces to her that she has a wandering spleen. ("We're Gonna Be All Right")

Dr. Ron and Dr. Cunningham explain to Susan the implications of her wandering spleen and the surgery she will require, which will be assisted by Ron. Susan is preoccupied because the first time Ron will see her naked is in the operating table, but he tells her he'll be a gentleman about that. Later, during a dinner date, Susan notices Dr. Ron's lack of skills when it comes to cutting through a bovine steak, and she worries about his skills as a surgeon too. She points this out, and he seldom overreacts, by storming out of the house. Later, Susan pays him a visit at the hospital, telling him that she was gonna apologize, but then thought about all the times she crawled back to a man and decided that that was not going to happen this time. However, Ron tells her that, while she's been waiting for him, she's already received amends gifts at her house. They get back together. Later, Susan and the girls go over to Bree's house to play poker and get dirt on Betty Applewhite, and are surprised to find the latter there instead, ready to play with them.("There's Something About a War")
After Dr. Ron and Dr. Cunningham bring up the fact that Susan's health insurance needs to be in order so that she can get her splenectomy, Susan finds out that she has no health insurance whatsoever because her former agent, Lonny Moon, embezzled from her. This leads to her re-marry her ex-husband, Karl, in order to get his health insurance. ("Silly People") Later, Edie finds a ring among Karl's belongings and thinks he's gonna ask her to marry him. Edie then spots Susan and Dr. Ron eating at another table at the same restaurant where she and Karl are, and drags Susan into the restroom with her, to tell her about the ring. Susan is anxious because she knows the ring is for her. Later, she and Karl do get married. ("Thank You So Much")

Susan is admitted into a local hospital for her splenectomy, and is soon showered with flowers by Dr. Ron, complete with a card he wrote himself in which he claims to want to hold her 'beating heart' in his hands. Nurse Hisel gets all emotional over the card, and it becomes apparent that she has a crush on Dr. Ron. After a visit to Susan, Karl tells Nurse Hisel to take care of his wife, and Hisel is distraught. She confirms through the records that Susan is married and therefore acts snidely towards her, outraged that the object of her crush's affection is apparently two-timing him. Susan comes clean to her about the insurance fraud and her second marriage to Karl, and Hisel accepts the explanation and tells her Ron is working up the courage to tell Susan he loves her. Susan realizes, after this, that she doesn't feel a 'spark' with Ron, not the way she did with both Karl and Mike. When she is later being wheeled off to her surgery, anesthetized and woozy, she notices that Mike came to see her, and is very happy about this. In the operating room, Ron tells the woozy Susan that he loves her, and Susan says, in reply, "Thanks. I love Mike." A shocked and confused Ron asks who Mike is, and Nurse Hisel somehow blurts out that she is married to a guy named Karl, and rushes out of the room in tears. Ron is nothing short of frustrated, as he tells Dr. Cunningham, "Let's cut this bitch open." ("There is No Other Way")

After Susan is discharged from the hospital, Dr. Ron arrives in her hospital room to bring her home and to ask her a few questions. Ron asks if she happens to know anyone named Mike, because while under anesthesia Susan professed her love for Mike, much to Ron's chagrin. Susan lies and assures Ron that he is mistaken and that she is not seeing anyone. He then asks if she is married to Karl Mayer because of Nurse Hisel's run-in with him. Susan tells Ron that the relationship is platonic and that Susan only re-married Karl because he has an excellent insurance plan. Ron feels sad that Susan could not afford medical care but is still upset that she did not tell him. Later, Susan invites Dr. Ron and Karl over for dinner where they actually have a good time in each other's company. The plot thickens when Karl purposely breaks a pipe which proceeds to leak. Karl then asks Ron to go across the street and alert the plumber, whom he refers to only as "Delfino". Ron then hurries across the street and explains the situation to Mike. As he gathers his tools, Mike tells Ron to call him by his first name. Immediately, Ron runs out of the house where Susan is already on the street chasing after. Susan then falls out of her wheelchair making it look as if Ron pushed her. Mike sees this and tells him threateningly to never to hurt her. While Mike walks away, Dr. Ron shoves him but the fight is soon broken up. Susan is then left on the street alone. Soon after, Mike tries to patch things up but only makes matters worse since Susan is still angered because of their break-up. She soon regrets her words when Dr. Ron breaks up with her over the phone. ("Could I Leave You?") Later, Karl and Susan decide to come clean about their secret wedding to Edie, but they realize they're too late, seeing as how Dr. Ron, out of spite, has already told her the truth. ("Everybody Says Don't")

Dr. Ron is mentioned several years later when Susan Mayer and Edie Britt get locked in a basement, and the latter starts mapping out the former's romantic life in order to point out that she doesn't fare well without a man. Ron is brought up as the guy Susan dated while Edie was with Karl. ("Connect! Connect!")

It is likely that Dr. Ron is still completing a surgical residency in that he was unable to perform Susan's surgery without the supervision from an attending

Retrieved from "https://desperatehousewives.fandom.com/wiki/Ron_McCready?oldid=86122"
Community content is available under CC-BY-SA unless otherwise noted.