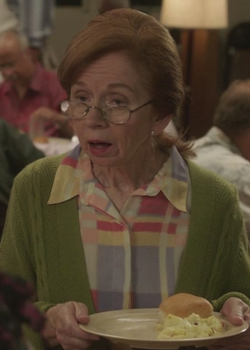 Rose is an elderly lady who told Renee Perry that Ben Faulkner was making a fool out of her.

To impress Ben into liking her, Renee pretends to have an interest in the elderly and charity. Ben asks Renee to go on a date with him, but he in fact takes her to serve food with him at a soup kitchen to serve food. Later, Renee is serving food to Fairview's oldest residents. She encounters an old woman who tells Renee that Ben is messing with her by taking her to the senior center on their first date. Renee struts over to Ben, gives him her hairnet, and leaves. Ben follows her and jokingly admits that he took Renee there to make fun of her, and calls her out for not being truthful about her personality. In turn, Renee opens up to him, telling him that after her mom died she were bounced around to places like this and hated it. Ben says he knows what it’s like to claw your way out of something too, and just like that, the two have found something in common. ("Making the Connection")

Retrieved from "https://desperatehousewives.fandom.com/wiki/Rose_(8.02)?oldid=77819"
Community content is available under CC-BY-SA unless otherwise noted.