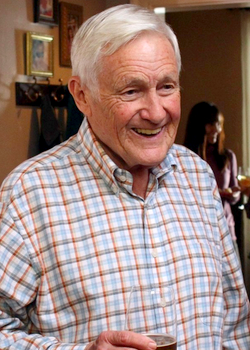 Whilst in the army, Roy was stationed in Korea with a man named John Dansac. Whilst patrolling, Roy felt something whiz past his ear so he turned around to investigate and he saw John lying on the floor dead from a gun shot. Roy then went to ask his sergeant why it was John that died and not him; the sergeant replied "Why ask?".

After Roy left the army, he met and married Miriam Bender. Roy and Miriam had a few children and were married for forty-nine years until Miriam got braine cancer. Roy did his best to help his dying wife through cancer and was always there for her. Miriam died a week before their fiftieth wedding anniversary. At some point in his life, one of Roy's children had a deaf son named Scotty.

Karen McCluskey is taking a walk one day and Roy smiles at her. The following day, she smiled back. The next day Roy invites Karen in and they have sex. Roy and Karen start to date and one day while walking together, Karen tells Roy she loves him. Roy is about to say it back to Karen when he discovers Julie Mayer's body unconscious and tells Karen to call the police. Later on, at Karen's house, Karen leaves hints to Roy that she wants him to say that he loves her. Roy tells Karen that if she got hit by a bus that she would really miss him. Karen is upset but then Roy confesses that he loves her which makes her finally happy. ("Being Alive")

Karen convinces Lynette Scavo to hire Roy to do some construction work around the Scavo house since he lives off of a fixed income.

Roy goes to Bree's house, with Karen, for a Thanksgiving meal.

Roy spends time at Gaby's house after Karen kicks him out. Gaby keeps him around to make sure the girls stay in line while Carlos is in rehab.

After Gaby tells Roy about Karen's cancer, the two reconcile and Roy promises Karen that he will stay with her "for better and for worse." Explaining that they had the better and now, the worse.

Retrieved from "https://desperatehousewives.fandom.com/wiki/Roy_Bender?oldid=87781"
Community content is available under CC-BY-SA unless otherwise noted.