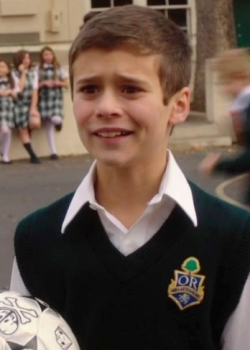 Ryan Vayo is a young classmate of Juanita Solis', as well as her unrequited love interest.

When Valentine's Day approaches, Juanita and her mother, Gabrielle Solis, decorate several cupcakes accordingly for Juanita to hand out the following day at school. She decided that store-bought cards are lame, and wants to do something original, and is taking extra time on a cupcake dedicated to Ryan Vayo, a kid she likes who can dislocate his shoulder and make it look like he was in a car accident. However, the following day, Ryan eats her cupcake but doesn't give her anything in return, so her mother forges a signature from Ryan (written with a piece of chocolate) on a valentine, only to light up her daughter's mood, but tells her not to speak a word of it to Ryan, as to not ruin their relationship. Juanita believes her.


However, the following morning, during recess at Oakridge Elementary School, Ryan Vayo is playing soccer with his classmates, and Juanita is leaning against the playpen, insistently staring at him with a large grin. Ryan notices this and is weirded out. After a while, he picks up the football and heads towards her, asking her what she is staring at. Juanita shooshes him, telling him not to talk. He asks why not, and Juanita tells him he'll ruin their relationship. A discontent Ryan drops the football and tells her they don't have a relationship, and Juanita reminds him he gave her the "XOs". Ryan is confused, asking her what that means, and Juanita tells him, "I'll show you." This said, she grabs him and throws herself at him for a make-out session.

Following this, it is revealed that Ryan cried for 20 minutes straight after being 'assaulted' and could barely tell Principal Hobson what happened. Juanita's mother was called to school due to a 'sexual harassment' claim against Juanita, and eventually had to come clean about the forged valentine. ("Is This What You Call Love?")

Retrieved from "https://desperatehousewives.fandom.com/wiki/Ryan_Vayo?oldid=84449"
Community content is available under CC-BY-SA unless otherwise noted.