View source
watch 02:24
Wiki Targeted (Entertainment)
Do you like this video?
Play Sound

"It's a hell of a day in the neighborhood."

*Not credited in "Now You Know". 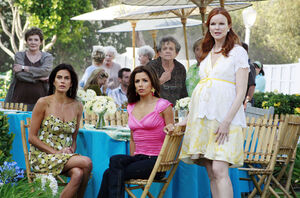 Plot Synopsis: Edie surives her sucide attempt and gets constant care from Carlos, Katherine Mayfair returns to Wiestra Lane after moving away twelve years ago, Susan gets some unwanted news when she discovers she may have menopause, Bree and Orson continue to lie to their neighbours about the pregnancy, Lynette lies to her friends about her cancer and Gabrielle and Carlos continue their affair.

Smiles of a Summer Night 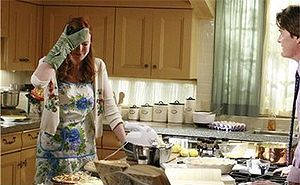 Plot Synopsis: Bree and Katherine come to blows over food and Bree tries to discover one of Katherine's recipies, Susan struggles with choosing between Mike and Julie in situations, Dylan confronts Katherine about her father, Gabrielle tells Lynette about her past and Edie blackmails Carlos. 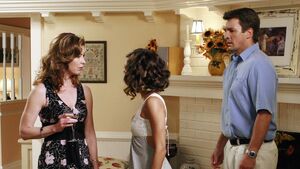 Plot Synopsis: Susan arranges a games night and the other ladies use it as an excuse to get Katherine drunk so they can try and discover her secrets, Stella tries to numb Lynette's pain during her chemo, Edie purposely lets slip about her and Carlos' engagement infront of Gabrielle and Julie and Dylan search the Mayfair house.

If There's Anything I Can't Stand 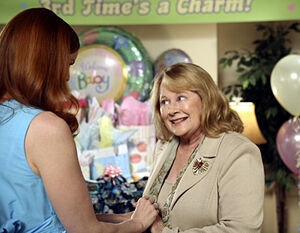 See main article: "If There's Anything I Can't Stand"

Plot Synopsis: Bree is shocked when Phyllis turns up at her baby party, Edie gets some unwanted news which almost leads to Carlos' and Gabrielle's affair being exposed, Katherine's Auntie Lillian comes home to die, Lynette tries to improve her and Tom's sex life and Susan makes a mess of greeting new gay couple, Lee and Bob. 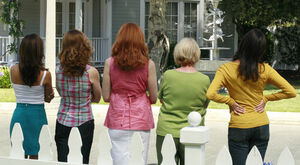 Plot Synopsis: Katherine and Lynette go against each other to become president of the Homeowners Asscociation, Gabrielle gets a suprise when she and Carlos run into her ex-lover John Rowland, Bree and Orson try to get Danielle to come home but Phyllis won't let her go so easilly and Susan once again comes to disagrement with Bob and Lee.

Now I Know, Don't Be Scared 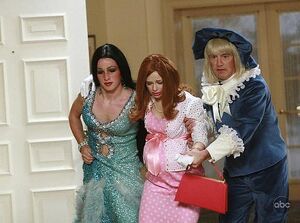 Plot Synopsis: Susan finds out that Mike's father, Nick, isn't really dead but in prison for murder. Lynette finds out she's been cured of her cancer. Danielle gives birth to a baby boy. Gabrielle is upset that Carlos hid money from her while they were getting divorced. Carlos dumps Edie. Gabby tells Victor that she's leaving him.

You Can't Judge a Book by its Cover 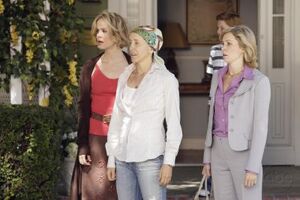 See main article: "You Can't Judge a Book By its Cover"

Plot Synopsis: Bree tells Susan that Mike has a drug problem. Stella leaves after learning none of her daughters want her to live with them. Bree gets her grandson, Benjamin, circumcised despite Orson's objections. The question of Victor's survival becomes a cliffhanger after Gabrielle knocks him off his boat. 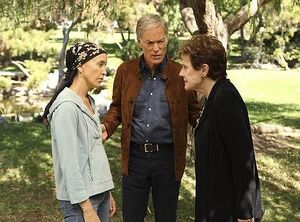 Plot Synopsis: Adam's surprised by a stalker from his past. Susan spies on Julie as Julie kisses her tattooed boyfriend. Detectives question Gabrielle about Victor. Lynette's reunited with her stepfather Glen. Bree and Orson face marital problems. 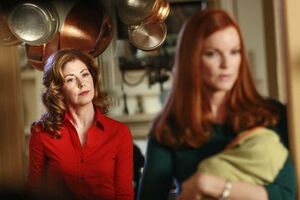 Plot Synopsis: A tornado’s on the way. Carlos and Gabrielle are packing to move. Susan confronts Orson in his office for giving Mike pain pills. At least four people die in the tornado. 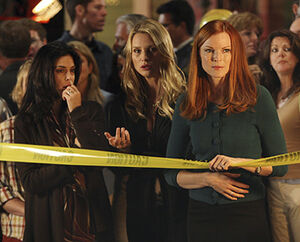 Plot Synopsis: Lynette and Karen spread Ida's ashes, Gabrielle visits a blind Carlos in hospital, Bree fixes Andrew up with a gay builder to try and get him to work on her roof, Susan and Julie enjoy Bree staying at there house and Dylan and Adam discover a shocking secret about Katherine. 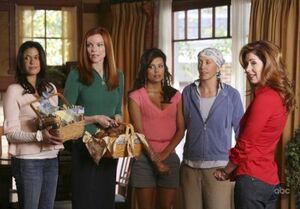 Plot Synopsis: Two weeks after the tornado, Mike is about to finish rehab. Gabrielle learns from Edie that Carlos's blindness is permanent. Susan's hunky young male cousin reveals more than expected. A surprise wedding ceremony has its share of secrets. 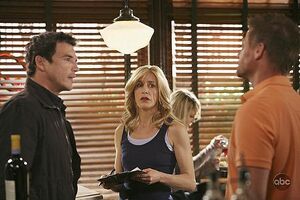 Plot Synopsis: Gabby struggles with the reality of having a blind husband, Lynette is surprised when someone from her past (Rick) shows up at Scavo pizzeria. Bree and Katherine join forces to plan the Founders Day Ball. 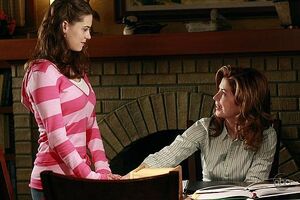 Plot Synopsis: Carlos is getting a seeing eye dog. Gabrielle wants to train the dog to find her keys and turn off the radio. Unhappy with the dog, she secretly returns it to the trainer. Rick's restaurant was set on fire while Lynette and Tom were at the Founders Ball. Tom was missing for part of the time, but Lynette tells the police she followed Tom to the car and saw him listening to a basketball game on the radio. This alibi is enough for the police, but perhaps not enough for Rick. 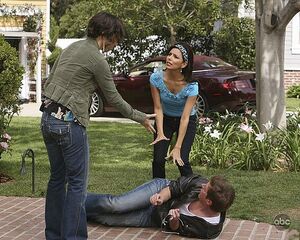 Plot Synopsis: Gabrielle is surprised to find Ellie has a man in her bedroom. Lynette brings Kayla to a psychiatrist, but Lynette and Kayla settle the problem while they're in the waiting room. Susan visits Lamaze class with Julie, where she's surprised to see Karl with his very pregnant wife. Susan regrets coming in her old clothes. At the next class, Susan brings Mike and they both dress up. Karl masks a smile upon learning Mike has been free of drugs for over a month. 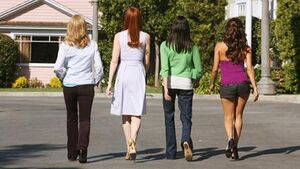 Plot Synopsis: Adele Delfino, Susan's mother-in-law, arrives for a visit. Carlos and Gabrielle find out their tenant, Ellie, has a dark secret. A full scale war erupts between Bree and Edie. 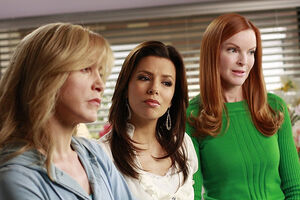 Plot Synopsis: The ladies of Wisteria Lane meet Susan and Mike's new baby, and Susan tries to change the name from Maynard to Conner. Gaby forms a strong bond with their new tenant, Ellie, who happens to be a drug dealer. Lynette is accused of child abuse, since Kayla called and told a doctor. 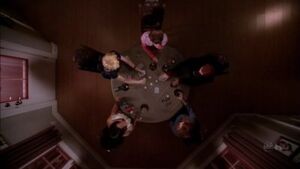 Plot Synopsis: Several residents of Wisteria Lane are faced with deadly threats when Katherine's ex-husband wants to see his daughter again. Susan realizes she will soon lose her daughter when she goes off to college early, and Katherine Mayfair's secrets are finally revealed. In the closing moments of the season finale, the show flashed ahead five years, which brought many surprising changes in the lives of the Housewives.